Although I'm (obviously) a manic blogger I actually don't officially follow that many......I think my dashboard blog roll is currently at 17.  One of them is the photographer Annie Collinge whose work I love for its strong considered identity with a sense of humour.  Her blog is nothing to do with this work in content but its sensibility is the same..........its quirky sightings condensed into bitesize portions of pictures.  The peculiar moments we all see on a daily basis but don't record........meanwhile Annie is there remembering to can it!
To begin a few days of nostalgia on the blog and a kind of "review of 2009" I have asked Annie to pick her own personal fave posts from her back catalogue so far and recall the scenario (check out the Ghostbuster pooch!): 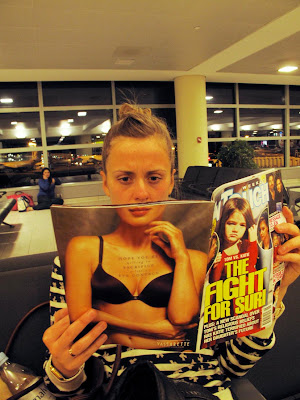 This is a photo of my sister, Miranda when we were on our way back to London at JFK airport. I have put this in, only because I'm always a fan of the novelty snap shot. 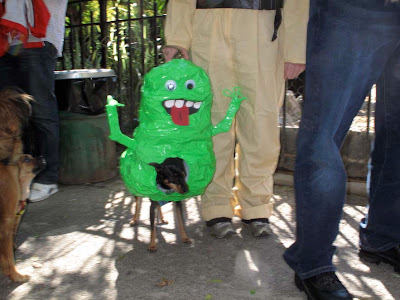 This is one of various snaps of dog Halloween in Thompkins Square park.  It happens the weekend before Halloween and is my kind of fun, however,  I'm not entirely sure if its sure cruel or the dogs are actually enjoying themselves.
Was a very strange day which culminated in my friend having an argument with photographer Mary Ellen Mark about who was taking a picture of what.  I sort of cowardly hid in the background and couldn't quite believe that the person I learned about in A-level photography was now trading insults with my friend over a German shepherd dressed as a first world war soldier. 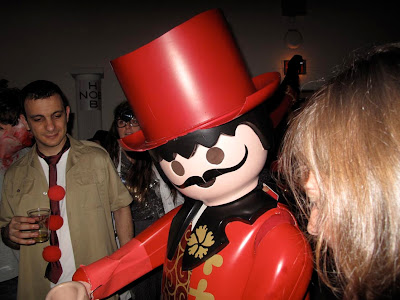 This was taken at a Halloween party in a Masonic temple in Fort Greene Brooklyn, this year it totally pissed it down so the parade was a bit of a write off, so many soggy costumes and unintentional panda eyes.
There is actually a man inside this costume and its actually home made, if you look closer the eyes are made out of brown paper circles. 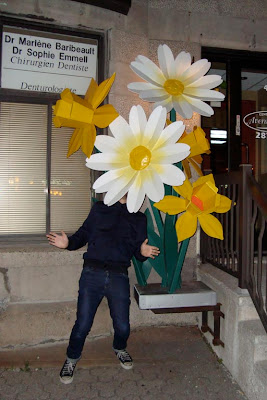 We decided to take the train from Penn station to Montreal, it takes 9 hours (I think) and goes all along the Hudson River so its very beautiful.  The border patrol was totally terrifying however, I think I assumed that because we were on a train we would not be interrogated and just cruise through, silly me.   I liked Montreal but it all seemed very deserted at night, this was taken on a midnight walk through the empty streets. 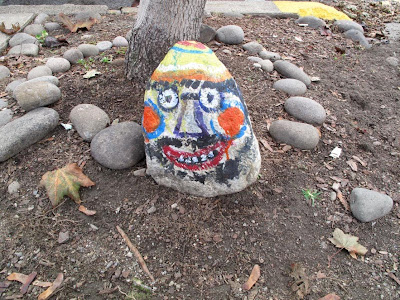 One weekend we decided to hire a car and have a little trip to Dia Beacon, we stopped at a town called Cold Spring for lunch.  Its sort of a rich old hippy town, a bit like Woodstock and I found this guy outside one of the junk shops.
It sort of reminds me of Quentin Blake's illustration of The Twits. 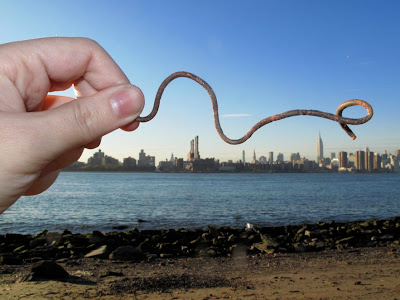 This was the view from the park where my apartment was in Brooklyn, I just found this rusty bit of wire on the beach (if you can call it a beach). 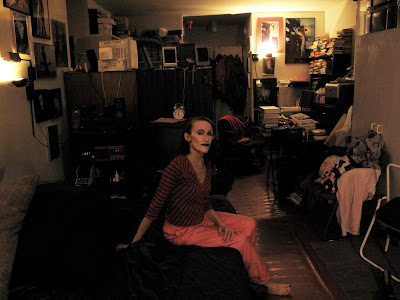 Okay, although this is not the greatest photo, it's the subject which is interesting.  I saw Linda in the street and followed her round Home Depot until I plucked up the courage to ask if I could take her photo.
I am generally pretty terrified of doing this sort of thing and am still not quite sure what came over me.  Since then, I have photographed her quite a bit, in and outside her apartment in Manhattan. She wears these amazing bright colours every day, and totally hates wearing black.  I love the contrast of her sort of Gothic look with these mad bright colours.  She is also a very interesting and lovely lady and I hope to put together a little exhibition of these pictures soon.
Posted by fredbutlerstyle at 15:58