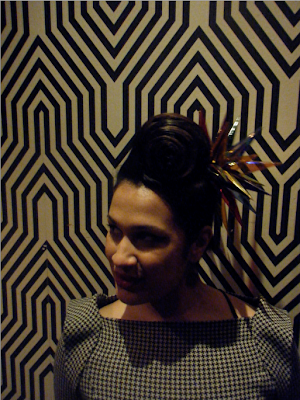 The LOVE Thing from LOVE on Vimeo.

Here is the beautiful Bishi shot against a very "Bishi" backdrop of the wallpaper at The Electric cinema on Portabello Road.  We took seats in the comfy cinema to preview the new Love Magazine trailer on the big screen with an introduction by the creative director Katie Grand and star Pixie Geldof.    This 1min motion advertisement, directed by James Lima focuses on Prada pre-fall looks..........and it is through Miuccia Prada that Grand first met James when he shot a previous Prada short "Trembled Blossoms".  James is known for his experimentation in computer graphics and you can see that he has literally gone to town in this project filmed in NYC:

"I love telling visual stories using technology.  Still life comes alive with movement and emotion - it is very intimate and powerful.  I call it 'Motiontorial', and it has the potential in the fashion industry to be very similar to what happened in Hollywood with the introduction of sound to silent films."

Its brilliant that a fashion film now has the weight to be shown in this setting and I can't wait for the day when this kind of event becomes the norm............as it is already heading that way....

For anyone wondering, the soundtrack is by Steve Mackey  - "A/B Machines" by Sleigh Bells