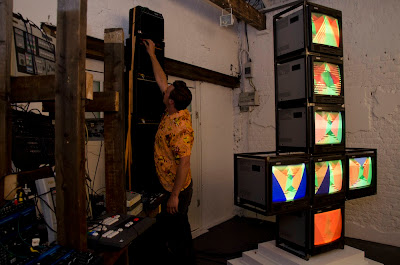 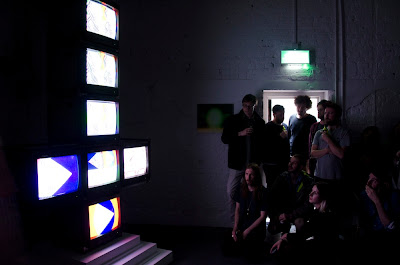 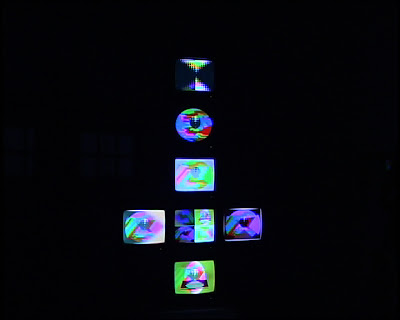 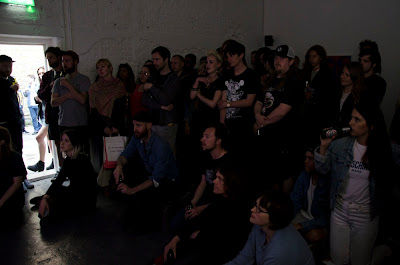 The latest exhibition at The Depot Gallery in Clapton co-curated by Suzannah Pettigrew and Roxie Warder is new work from James Alec Hardy and Dominic Beattie.  Here is the cosmic time-based media, totemic stack of video monitors by Hardy = installed as a series of states set to change throughout the duration of the show.  For the opening night the video wall became a performance piece, accompanied by a stack of amplifiers and analogue video equipment mirrored in formation.  As you can see in the photos above, the live video feedback was looped through a system of monitors and amplifiers manipulated by Hardy. The seven channels of footage were recorded as a series of video still images to be extracted in the second phase of the work.  The exhibition focuses on the increasing entrapment of technology, shown through its material and symbolic origins on video by Hardy, and less identifiable visual tropes in mixed medium painted works by Dominic Beattie.

You can see / hear the footage of Hardy's performance and Beattie's paintings captured at the private view in these three clips and visit the space until 18th June att The Depot: 38 Upper Clapton Road, London, E5 8BQ.  (Images thanks c/o The Depot co-founder Tilley Harris)