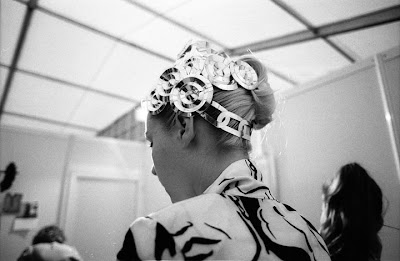 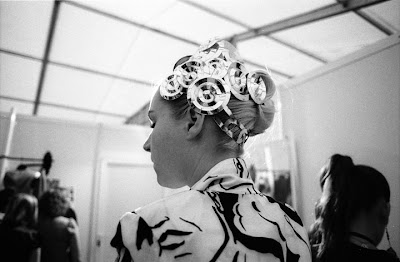 Since sending out pleas for people to vote for my blog over at the Dazed Digital awards, (subliminal message VOTE VOTE VOTE VOTE VOTE VOTE VOTE VOTE  VOTE VOTE VOTE VOTE VOTE )
I have been getting responses that have ignited the coals in my soul, giving me heart-warming reassurance in the support network that has arisen since I began.  So here is a shout-out to everyone that has voted so far and 4 gold stars to those have re-posted the link.
Here is an exceptionally surprising and lovely reply from Miguel Villabos, who attached these archive images which I have never seen.  They are from the Noovo festival a couple of years ago (Sanitago Del Campostela) when he had an exhibition at the event.  These portraits were taken backstage at the ThreeAsFOUR runway show when I pitched up to visit my best friends and check out Diane Pernet's part in organising the festival with her choice of participants to promote.  I learnt about who Peter Pilotto were, Roman Kremer and meet some fascinating folks Mr.Pearl, Mark Eley, ..............and super friendly Miguel!   I discovered his incredible ethereal reportage and also that he dabbles in jewellery........the silver snails that adorn Diane's mantilla were a present from Miguel!
To see his portfolio of magnificent monochrome portraits head to:
http://www.miguelvillalobos.net/
Posted by fredbutlerstyle at 05:57