Just like our hero Gareth Pugh presenting a “pre-collection teaser” at NY fashion week before the real deal of his catwalk show in Paris next week, Fred and I came up with the idea of a post describing the SHOWstudio party. Because the exhibition is as big as Willy Wonka’s chocolate factory and at least as fantastical, it warrants a post when LFW is over and there’s time to examine it in more detail, but for now this is just a taste of what's in there.

The party tonight was exciting enough in its own right, what with the likes of Lee McQueen and Nick Knight wandering about, and Penny Martin glam in head to toe in black, ever the hostess with the mostess was almost enough to distract us from the exhibits like . . . . . 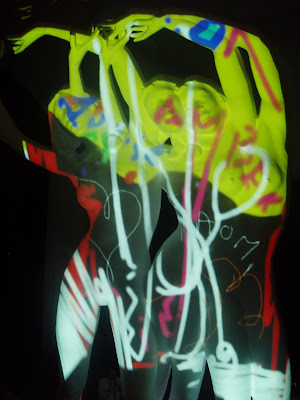 . . this enormous 3D triptych of Naomi Campbell, illuminating the entrace and best off viewed from an elevated platform. . . . 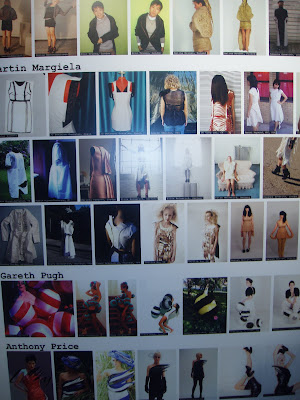 . . . a section devoted to the 'designer download' project, where SHOWstudio viewers were encouraged to create thier own designer garment from the sewing patterns published on line by SHOWstudio from various visionary designers.

Also, a section of films, including Fred's atmospheric contribution representing the nape of the neck . . . and one of Ruth Hogben and Gareth Pugh's fashion films, which originally premiered on the groundbreaking website.

Speaking of which . . .we bumped into the maverick designer himself, and couldn't resist the chance to ask him why he thinks SHOWstudio is quite as fab as we do.

"well, it's Nick Knight, isn't it? The possibility of showcasing fashion through the medium of film is nothing new: that's always existed. But it's Nick who kept on pushing it. Both pushing it as in promoting it, but also pushing it as in artistically - making it more extreme and more ambitious each time. I just think its so important. Its never been more relevant than it is now.

Multi media is very important for designers and although I'm not saying it will replace the catwalk - fashion shows will always be there, they won't be replaced by video but it's a chance for designers to achieve that message in an even more controlled environment than a catwalk show can. It's your chance [as a designer] to get everything perfect"

What can I add to that? Go and see the exhibition. I will do.