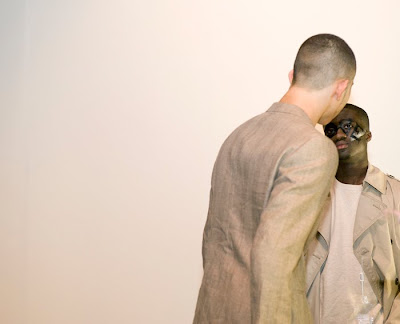 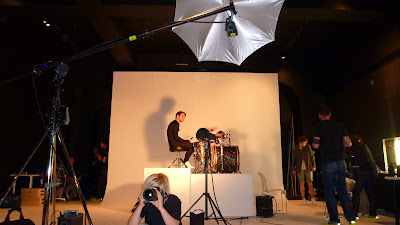 Jasper Wyatt
Just before Nick Knight descended on the live studio at Somerset House, Jason Evans held fort last Friday.  Jason spent the day shooting models selected from the SHOWstudio exhibition casting booth.  The boys were styled by Max Pearman with makeup by Mel Arter for a story that will be appearing in POP magazine.
I got in touch with Jason for some insider info to contribute to my blog.  In true dailynice fashion, Jason was ridiculously nice in answering my proposition, but even nicer than that he handed it over to his assistants.  (That is really the point of assisting .........besides learning your trade and being inspired......its picking up breaks from your mentor which is the expected exchange for offering your undivided attention 24/7...........so its good to see that this interchange is still rolling ............if you get a goodie like Jason!)
So here are two snaps from behind the scenes on the day by Jasper Wyatt and Bim Hjortronsteen.  See more from Bim's photodiary at Sweden's photo mag http://bimsblogg.blogg.se/
Posted by fredbutlerstyle at 04:50