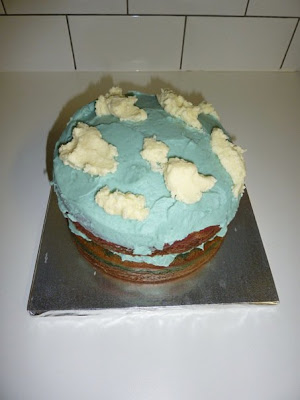 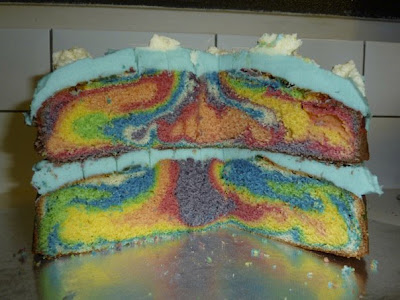 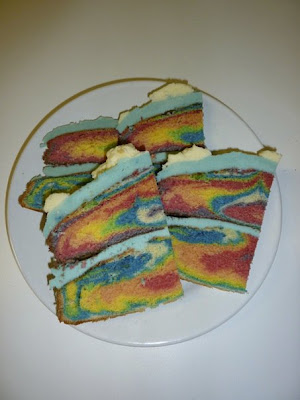 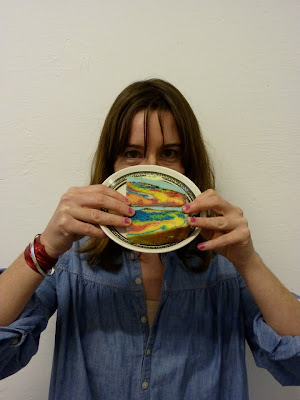 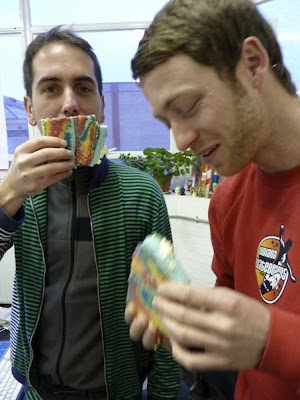 Tara's studio mate tasters Damien Poulain and Regis Tosetti
So here we are onto the interview with VERY serious questions to pick apart the cakeccentricities of Lilly's vanilliri tastebuds.
To accompany the text are images of courtesy of Tara Darby who was the birthday girl that I made the cake for.as I couldn't attend her Rainbow Rave party at the weekend.   I loved making this cosmic cake and I'm so pleased that it turned out!  I was nervous as to how it would look when sliced, so it was a nice surprise that it worked!  I followed Lily's instructions of compiling the 7 colours in concentric circles but I confess that I did open the oven door when advised not to...................sorry Lily, I'm naughty.


1) You have spent time in NYC, can you tell us your favourite cake place in the city? (Im partial to a Conneticut Muffin on Prince Streeet!)
I never really go to other bakeries..I know that's weird but I get enough cake at home..I'm all about the pizza in NY - Carmine's or Roberta's in Bushwick. And absynthe cocktails and mutton chops at Keene's Steak House!

2) You have made cakes for fashion week ...................What would be your dream designer (living or dead) to bake for and what would you devise?
I'm going to be working with Duffy - an amazing jewellery designer this year - casting replicas of some of the pieces from his collection in chocolate. Chocolate skulls! fun.

3) What is the most stand out memory of cakes when you were a child............did you ever have birthday cake envy at a party? (I remember a girl who had a cake decorated as an exam sheet because she loved tests- WEIRDO!)

that exam cake sounds amazing!
4) I love the Armadillo wedding cake from "Steel Magnolia's" with Dolly Parton- that is hilarious! What is the funniest cake you have made?
I made a cake of Nick Griffin's head for a party my friend threw the other week called the British International Party. It got smashed up and crowd surfed during the gig, people were biting chunks out of it and there were ears flying around the room.

5) If an airline asked you to create a cupcake for the inflight meal, what would you come up with?
um. something plain

6) If you received a surprise party guest / kissagram, jumping out of a giant cake..........who would you most love to appear?

Out of a cake? Ummm... errr. bruce springsteen!
7) In the film "Young Sherlock Holmes" Watson has a trip that he is attacked by cream cakes that come alive.........I remember that scene was terrifying when I was a kid! What is your favourite cake moment from celluloid?
the scene from Hook the movie when they have the imaginary cake fight!!

8) Doing this research I have come across a blog called "Pimp My Snack" where people make massive versions of sweets. There is a great cake on there at the moment that is a giant Jammy Dodger. What would you like to make ginormous if you were making a cake for Alice In Wonderland?
I've actually done Alice in Wonderland cakes a few times.. I recently made a chess board with the pieces as characters from the story (like the Queen of Hearts etc). I want to do a life size human body lying in state cake - that's probably the biggest...

9) Why do people buy packet mix cakes, they taste grosse!? What is the most disgusting cake you have ever had to eat to be polite?
Ive eaten some pretty bad brownies from packets just because they were hash brownies

10) When I was at school I dropped my white fur earmuffs in my jam sponge and custard, they never recovered. What has been your worst baking damage to a garment and what kind of apron do you wear to work.............is it a novelty one?
I'm always covered in flour & icing sugar, I kind of like it. I have a few cute vintage aprons - no novelty ones but I do have an oven mitt that says 'who wants the big sausage?' and has a picture of a sausage on it. I bought it on ebay. 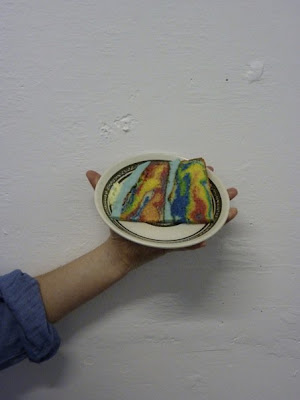 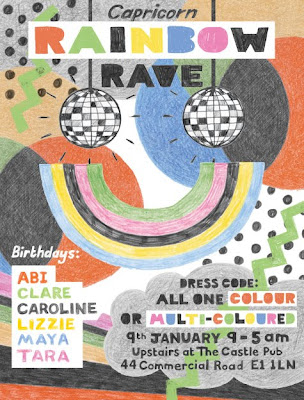 Party invite design by Maya
Posted by fredbutlerstyle at 05:42

Amaaazing cake - its even almost simetrical!
mmm food colouring..
I really love your creations and find your pieces inspiring :)
x