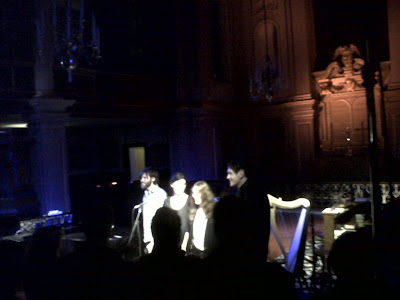 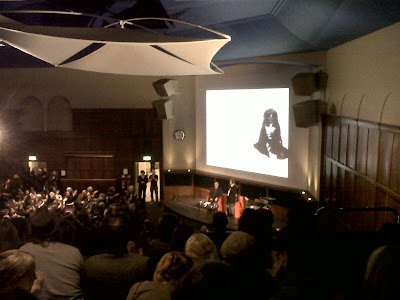 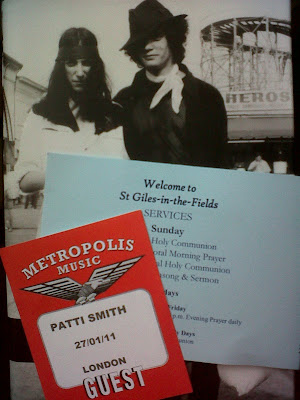 This week I was lucky enough to attend both a talk and concert with Patti Smith on 2 nights whilst she was in London. Both events centered around the brilliant book "Just Kids" which Patti penned for her beloved friend Robert Mapplethorpe. Its an emotional read - recounting the tale of how the two young souls found each other, fell in love, made art and grew up together until Robert's premature passing away aged only 45.

The conversation with Geoff Dyer took place at The Royal Geographical Society and the gig at St Giles in the fields Church which is a sentimental venue Patti has written about in her music. For this set list of tracks strung together to depict chapters of the book, Patti was joined on stage by her daughter Jessie on piano and Patrick Wolf on harp and viola. The performance was perfect with Patti on top form smiling, laughing, cracking jokes and belting out her anthems. The rapturous applause from the audience of devout fans congregated for her special appearance in the city was quite something to be part of. It was lush to hear her read passages from her own prose and ad-lib extra anecdotes either side to describe further detail.
Thanks to Patrick Wolf for getting me into the gig. So proud to see him perform with one of his heroes........... much like Patti experienced before him when she accompanied Bob Dylan on stage having admired him from afar as an aspiring musician.........and so history keeps rolling.............. awesome!

See Intelligence Squared Patti Smith site for tonnes of contents and links........
Posted by fredbutlerstyle at 05:24

i just started to read this book and honestly do not know much about patti smith at all!seeing her in person must have been an amazing experience~