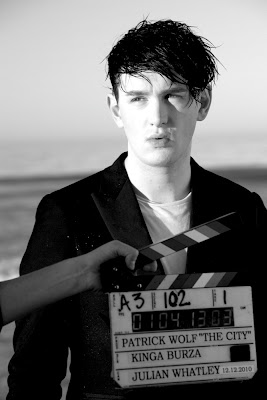 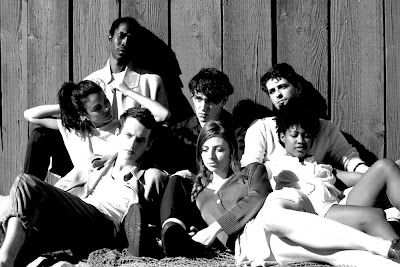 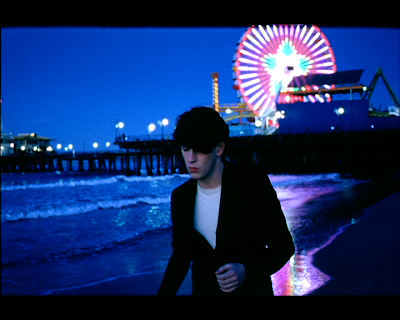 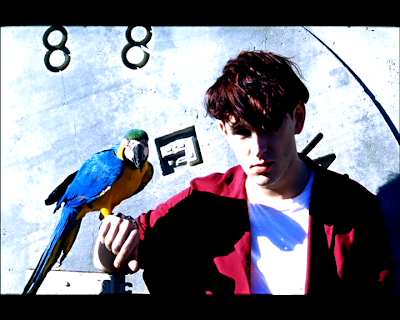 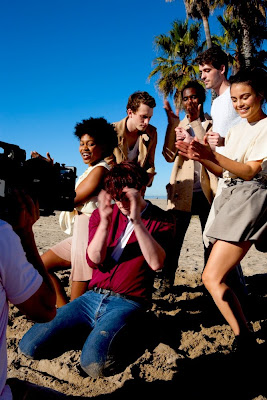 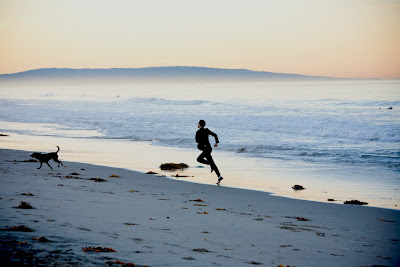 On the eve of Patrick Wolf's new video premiering over on The Guardian site, he has generously taken time to answer an interview for us here! Signing off his email, he also kindly offered me dating tips if I should feel inclined for agony aunt advise over a cup of tea............ to which I can answer only this - WHY THE HELL DID YOU GET EXTRAS FOR THIS SEXY VIDEO, SHOT IN SUNNY SANTA MONICA WHEN YOU COULD HAVE SHIPPED US LOT OUT THERE TO GET DOWN AND DIRTY IN THE SAND!!!!!!!!!!!!!.............HUH????

As you will see for yourselves tomorrow, its a very romantic number. I love it! Punchy piano chords send a shiver straight up your spine and you know its going to be a hit!
Its so romantic, that it also makes me a bit teary 3/4 of the way thru when there is a crescendo of strings "its about the keys to my heart you hold". It has all the optimism and charm of The Magic Position but more mature and heartfelt in its slick delivery and veneer with these visuals. It still has Patrick's cheeky character intrinsically interwoven too, which is a nice nod of inclusion in the new direction of his identity. A final scene of him running along chasing and playing with a dog is especially endearingly Wolf.

FB: Was the concept your idea or her pitch?

PW: It was a very organic process, It actually stemmed from a great conversation we had on the phone.. Kinga first asked me to talk openly about who and what the song was written about and what the ultimate message of the lyrics was about.. she then gave me an amazingly honest dissection about what she knew about my past videos and imagery and what she felt she now wanted see in terms of re-invention and new direction for me and the album, what she thought in terms of developing of my visuals and character and what her initial vision was after hearing the song for the first time. I loved this feedback and kept a very open mind and so glad I did.

Then we had lots of exciting conversations backwards and forwards for weeks and pretty much everything was done verbally strictly between us, it felt so intimate and so much more personal than being delivered a pdf of a mood board or an email pitch by a director you've never spoken to before, which I guess works for some projects, but i really get excited by these personal meaningful collaboration with directors and photographers.

When It came to location, she then mentioned the chance that we could get Santa Monica City beach, it was important to us both that the location could have a strong element of two environments, cityscape and nature, and the city of Santa Monica goes right up to the pacific ocean, they kind of sit side by side, the ocean and all the buildings there together. The pier in the video was also a somewhere I visited alot to find inspiration and peace when recording in 2010 while very sick with a mad throat infection, frustrated that I couldn't sing and feeling claustrophobic in LA.

Kinga said that she imagined that the song was as though I was protesting against the city by taking my gang down to the edge of the city to the ocean and celebrating
love and optimism together. I loved the idea of playing the piano with my back turned to Los Angeles and singing to the sun and the waves. She was adamant to shoot this film all on 16mm, which is certainly a rare luxury these days with everything being so digital.

FB: How did you come to work with Kinga?

PW: I had met Kinga at a party during the recording of the album exactly one year previous to shooting the video when I had been staying in Hollywood to start work with a dance producer called Miguel De Vivres for the initial recording sessions of the album. She was a friend of my sisters, the director Jo Apps, so we just started talking, I kind of knew quickly that I wanted one day to do a video with her, I just thought we clicked somehow.

Then I followed her videos over 2010 and was really blown away by the glamour and sophistication of the Hollywood video for Marina and The Diamonds. So when It came
to writing a dream list of directors at the end of last year Kinga was right at the top and luckily she was as excited to launch the video world for the new album as I was.
I really felt it was time after being director for the last couple of videos on my last album I wanted to totally trust and be directed for this album, to take a back
seat from the production and just get lost in my performance and the emotion of the video this time. From our first little conversation right up to the final edit, I totally trusted her. It was a great feeling and a felt lot of excitement and respect going on between us.

PW: Definitely yes, Both Kinga and I are huge Bruce Weber fans, it was definitely one of the first names to come up in our first conversations. "Lets get Lost" one of my favourite films ever was a great starting point for Kinga to start creating a visual world, I think it was an absolute dream come true that King was able to get the location of Santa Monica City beach, as that was one of the main locations during Lets Get Lost and I felt so close to Chet that morning while walking along the beach, he really is one of my favourite musicians of all time, It was amazing too as I had my own Santa Monica police escort all day driving us all about in his Police Van! I think visually there was definitely a tribute in there to Corrine Day to some of those inspiring images we grew up with in 90's reading the face magazine.

FB: You do look a bit like James Dean in some parts - its very sexy when it all gets wet!!!!! HOT!


PW: Credit is definitely due to Anthony Stephinson, my visual collaborator for this album, for the nod to James Dean..
He was amazing in coming up with all these outfits, his attention to detail is insane! working with Anthony is such a joy to work with its seems for me this next album is all about trusting and collaborating with people that know me and my work inside and out, who want to get lost in the creative process with me.. to use your term if I can miss Butler, creating ones own "DREAM TEAM" In terms of developing all the characters visually, Anthony and I did alot of research of classic James Dean films and images of Chet performing onstage.. But i think everyone involved in the video was very careful not to create a video of pastiche or recreation, I think this was probably the reason the video was not shot in High Contrast Black and White. In terms of getting wet.. It was the break of day and three dolphins in the ocean, that came right up to the beach and I just had to throw myself into the water. That kind of started
to become something we did quite alot that day!


Photo Stills taken by Heidi Laughton
Posted by fredbutlerstyle at 11:23

This interview is wonderful, can't wait to see the video :) xxxx