Here is the latest project by my friend Raphael Perret a.k.a Friedrich Digital which GABi of Three As FOUR named him when he interned for them in 2003. Since this time in New York, Friedrich has settled back in Zurich and been developing intensely bonkers art such as this new offering "Pimp My Bass". As a thoroughbred Essex Girl, this automotive project resonates with my formative years of watching the Friday night circuit circus.
Friedrich bought a pair of bass shakers that are usually used to make a car move with its sound system but here they have been transformed into a drawing tool. I daren't attempt any more explanation so here is the blurb and the final video:


Q: What ist “Paint My Bass”?
A: PMB is the little brother of Pimp My Ride.
A: An audio installation with a Bass Shaker. That is a loudspeaker producing frequencies from 20-100Hz. A visitor can plug an iPod and play music with heavy bass. Thus the music becomes the ‘gas’ for the Shaker to move/vibrate on the ground. While moving about, one can paint some traces. 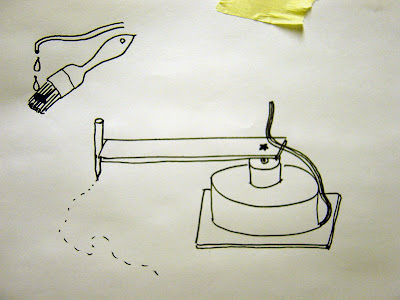 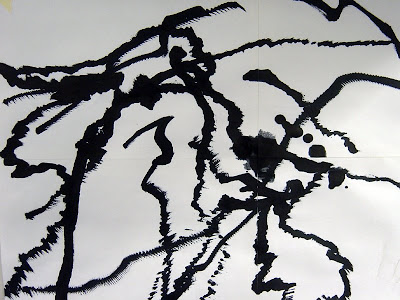 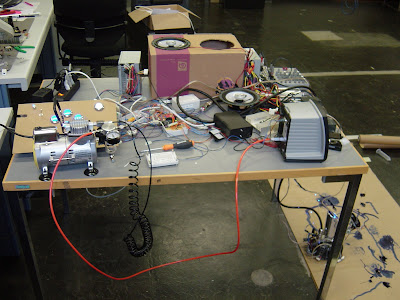 Paint My Bass from Raphael Perret on Vimeo.
Posted by fredbutlerstyle at 11:43 1 comment:

Email ThisBlogThis!Share to TwitterShare to FacebookShare to Pinterest
Labels: http://sode.li/paintmybass/ 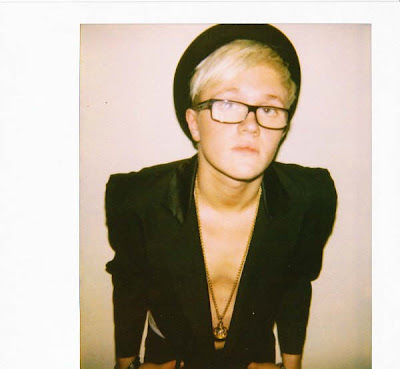 If I am Danger Mouse, here is my Penfold.

My blog now has an outside informer in the shape of a Central Saint Martins fashion communication foundation student Ben Fern. He has many projects to juggle in addition to starting a fanzine, whilst also applying for BA . So to experience some true-to-life fashion career crushing responsibility he has signed up to research for this resource.
Here is a mini synopsis of our new voice:

" Live in tooting but come from Loughborough, where i was at Loughborough Grammar school. Ermmm my favourite cheese is brie, favourite designer might have to be a mix between Proenza Schoeler and a good old bit of revolutionsionary Vivienne! I aim in a few years to either be a socialite, which i sincerely doubt will happen or a fashion something or other, just as long as it's fashion as its my only love. And make sure everyone who reads your blog is patient with me, as I'm new. "

I like the way this portrait already looks like a Polaroid by Ezra Petronio for Self Service! We have a contender.....
Posted by fredbutlerstyle at 13:13 No comments:

We can now give explanation as to why our set builder's (Andy Knight) Christmas Party was Blitz themed. They were inspired after spending a couple of weeks constructing a replica aircraft specially for the latest British Vogue story by Tim Walker with set design by Andy Hillman. Lily Donaldson had to hoist up her Bottega Veneta two-piece in order to scale the spitfire to hang off the the wing mid air inside Glemham Hall. I asked Andy if he had any anecdotes from the shoot to accompany these snaps. Unfortunately his funniest memory was some scaffolding terminology that he learnt during the installation with the riggers, which quite frankly is unrepeatable due to is misogynistic leanings! Lets hope Miss Donaldson was not privy to this colourful language whilst having her hair set in rollers!
There is another shoot in the same issue by Tim and Andy with Caroline Trentini set within a mystical white wonderland in a Swarovski special for which Andy was lucky enough to be flown to the HQ in Austria for research. 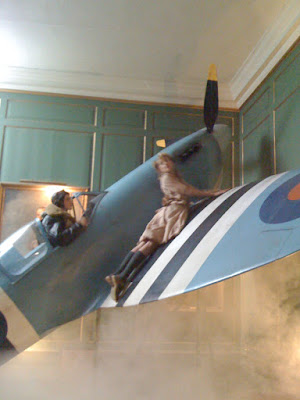 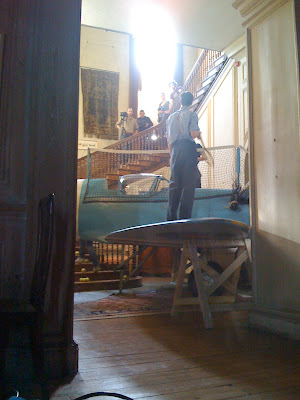 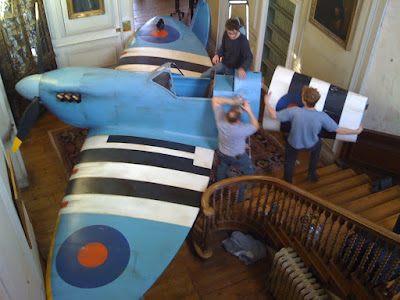 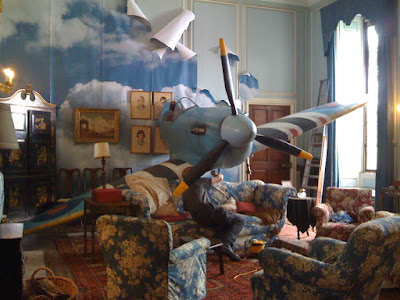 Posted by fredbutlerstyle at 01:07 4 comments:

Uslu Airlines have once again answered to my synesthesia callings with the latest edition to their nail varnish range. The previous collaboration for Colette's birthday in making a specially scented metallic blue colour, had me sniffing my fingers in a suspiciously unsociable regularity. This time, the concept has picked up on another of the 6 senses and has been developed with sound. Entitled "DJ Nails" its not so much about the speed at which said digits move but the choice of tune. 4 International DJ's were asked not only to write a track and pick a colour but also use the USLU trademark theme of airports to invent and title their very own gloss. For example BusyP (Justice) chose PSG -Petersburg in Alaska (James A Johnson airport) for his glow-in-the-dark version. Although he has never actually been there, the initials stand for PARIS SAINT GERMAIN which is his favourite football team.
For anyone that is in the dark about USLU .......... Feride Uslu founded the cosmetics company originally naming it after her unique airbrush application system before diversifying to other products. For example you can see circles of makeup airbrushed across the face and hair of a partygoer at the launch (accessorized with AMAZING rainbow necklace made from spraycan lids!). Thank you to Feride and Jan for sending me a selection of their iPhotos from the Colette Blogs Party No.1. (here is Feride - sitting right, obscuring her face with the magic manicure). 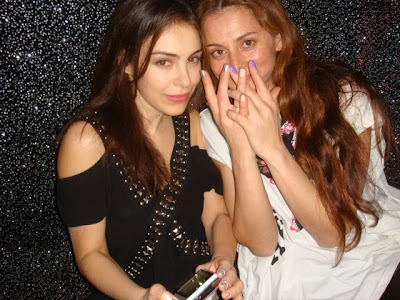 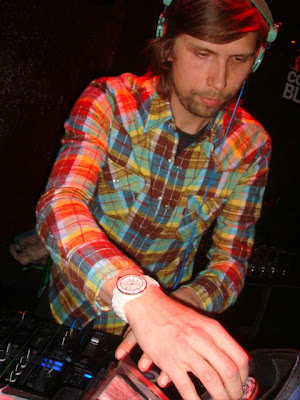 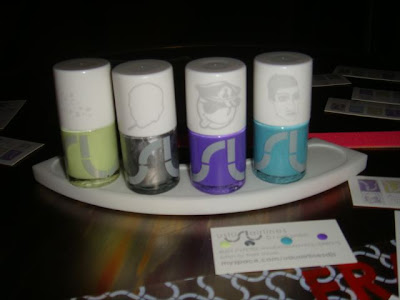 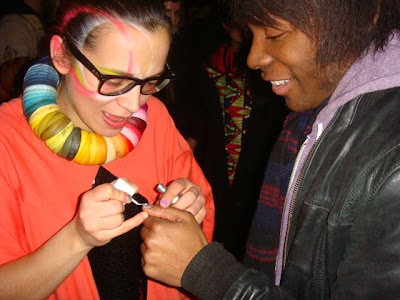 To check out the tracks by Headman, Rollerboys, Fetisch and BusyP go to http://www.myspace.com/usluairlinesdjs
Posted by fredbutlerstyle at 10:53 No comments:

Email ThisBlogThis!Share to TwitterShare to FacebookShare to Pinterest
Labels: usluairlines.com/

Annalisa and Dorothee invited me over to their studio to receive a magnificent gift which is quite overwhelming. They have donated a multicolour llama motif cropped hoody to my monochrome wardrobe. So I now have a new section to cultivate - rainbow day!
But that wasn't the most exciting relevation of the trip. Blow me down, the girls casually slipped into conversation that they can now announce a previously hush hush hook-up. Cooperative Designs are officially now consulting for Hussein Chalayan!
After working for him last A/W on some showpieces, they were received so well that he asked them to come back and consult this season! You read it here 1st! (most probably?!)
Can't wait to see what materialises from these two houses of covertable classics! 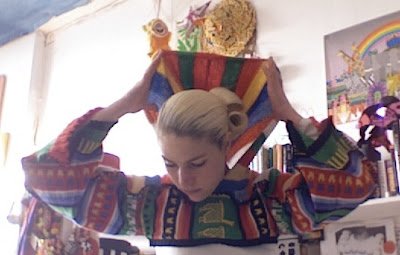 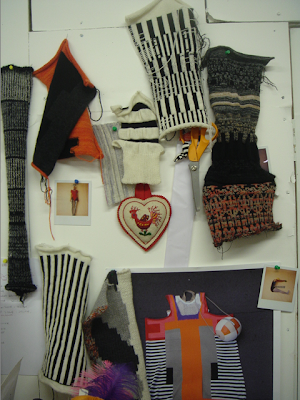 Email ThisBlogThis!Share to TwitterShare to FacebookShare to Pinterest
Labels: http://www.cooperative-designs.com/home.html 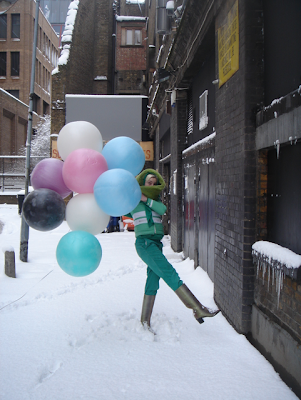 Never to miss a quick photoshoot opportunity, just before work, Alex Cunningham kindly lent me her balloons and snapped the moment. Yup, that's me rocking some mock crock high heeled welly boots. So wrong, it is undeniably just wrong NOT RIGHT. But its been worth it to watch the disdain and disbelief at peoples faces as they scan down my Kermit clobber and clock the offensive footwear. They are actually my sisters who acquired them on an early date romantic weekend in Venice.........it flooded and her boyfriend could only find this pair of boots for her...........2 sizes too big and distinctly disgusting.............hence I am now the proud owner..........
Posted by fredbutlerstyle at 02:29 3 comments:

"and yes I guess I do have vagabond ways" is a story from Mads fashion work with stylist Susie Lloyd with whom he has collaborated on a number of menswear shoots. I think it must be quite rare for editorials to still be shot on film so its really nice to see that it can be the format of choice to obtain classical imagery. Mads took a picture of his desk and equipment for me to use in his profile............I love that his cat tried to get in on the act to juj up the still life............ 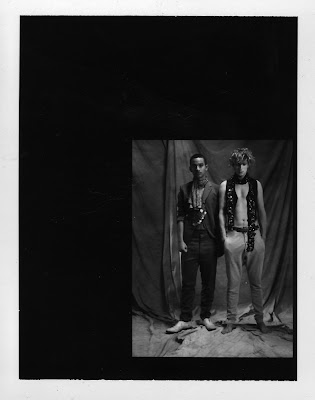 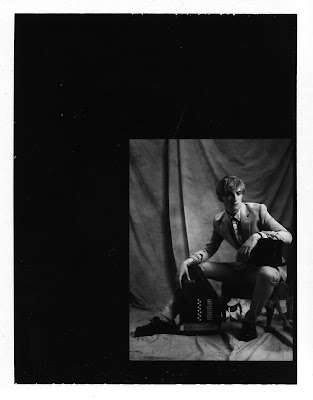 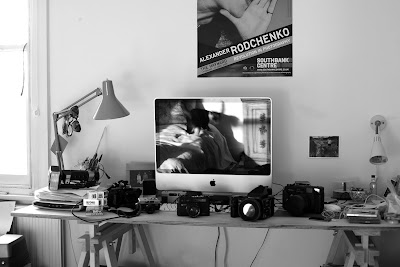 Posted by fredbutlerstyle at 09:42 No comments:

Email ThisBlogThis!Share to TwitterShare to FacebookShare to Pinterest
Labels: http://www.pdev.co.uk/sohomanagement/New/stylists/SusieLloydPort.htm

A significant segment to Mads work is profiling music acts, all the way from 50 Cent to the staff at Rough Trade Records. Quite often these are humerous anecdotal set ups that appear spontaneous and a chance for artists to try something new but still be themselves. I like the way this quirky dry humour comes through the images in smiles and scenarios. I always admire photographers that can make thier subjects laugh and interact to create an energy when their face is hidden behind the camera. These examples are more pensive Polaroids (Bishi & Allison Moshart), so to see what I mean have fun trawling his archive at http://www.mads-perch.com/ 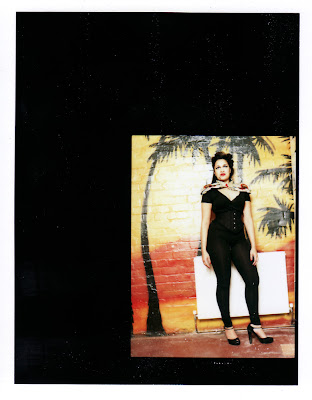 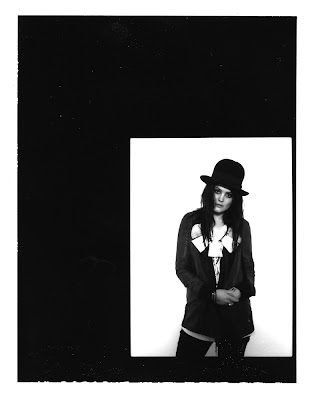 Posted by fredbutlerstyle at 04:35 No comments: