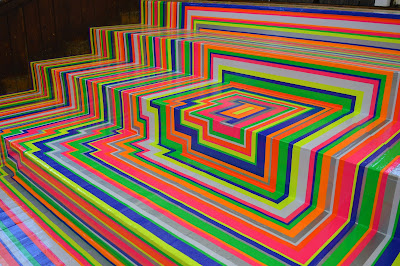 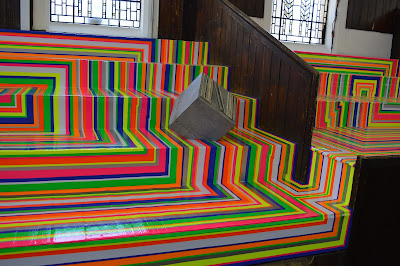 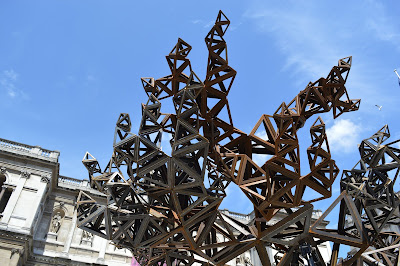 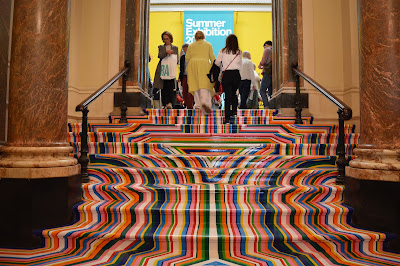 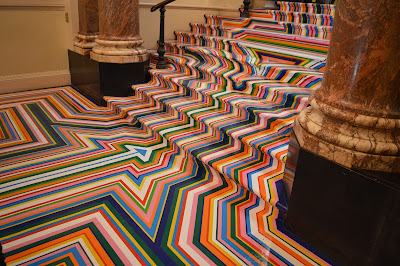 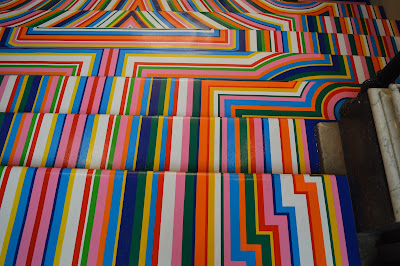 Jim Lambie has been in London laying his signature tape patterns to the floors of The Royal Academy and the Zabuldowicz Collection.  Both are free to view and caress.  If you've got a bike you can cross town and see both in under an hour  :  )
Posted by fredbutlerstyle at 10:11 No comments: 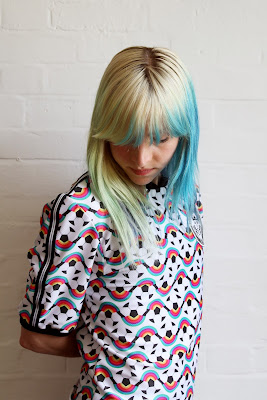 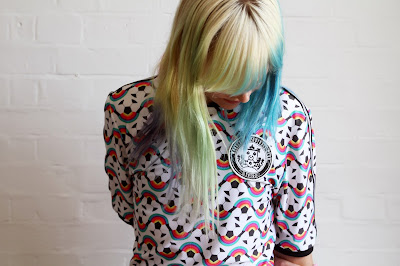 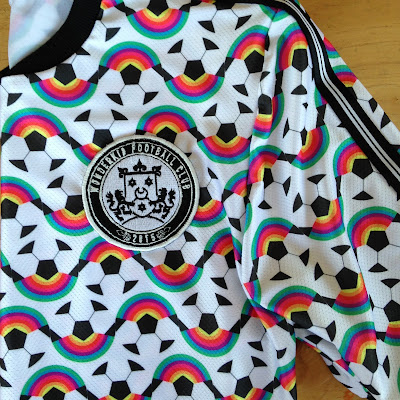 Wonderkid Film is a project to highlight and help eradicate homophobia in football by a film about a young player's struggle with his (sexual) identity within the sport.  Via a KickStarter campaign they have the funds to now shoot the feature with support from the Kevin Spacey Foundation and Sir Ian McKellen guesting on narration.  In the interim the team are expanding the message further by starting an all female team to play tournaments this season.  I was brought on board initially to design a logo for the visual identity which we have now turned into a repeat pattern for a football shirt.  Its basically my dream kit!!!

i-D have published an article to launch the collaboration for which I answered the following questions and was snapped wearing it by Lydia Garnett.

What made you want to collaborate with WONDERKID?

Football unites so many people from disparate countries, languages, backgrounds & beliefs yet  there is one overarching universal acceptance of homophobia which needs to change.  From the chants on the terraces to the under-breath snipes on the pitch; its a tolerated tactical issue for abuse.  How is it that It's 2015 and theres still only a handful of professional players who have come out?!
The sport is intrinsically linked with machoism which has manifested itself in this bizarre, outdated intolerance.  Surely every team wants the best player, so why persecute and torment talent on something so unconnected to the 90 mins of performance in a match.
Attitudes need challenging and educating which will be kick-started by this campaign.  The personal story will resonate and hit the message home to every team and supporters to hopefully reverse this irrational and dangerous fear-mongering.

What are your experiences in football?

Personally, I'm a member of a ladies team so I understand the need to promote minorities who play the sport.  We need to get more girls taking a kick-about seriously at school and considering it as a legitimate option.  I only discovered it later in life.  I wish I had started earlier and not lost all those years.  We need to apply that mentality to educating our youth so they don't waste any more time picking up negative prejudice.  When we are kids playing with our neighbours on the street we don't question each others differences, we just enjoy the game.  If only we could grow up carrying the same understanding instead of adopting fear like homophobia.

Posted by fredbutlerstyle at 03:29 No comments: 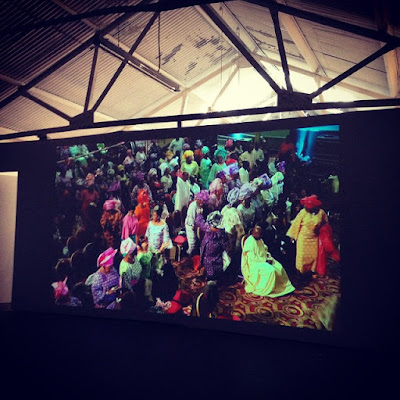 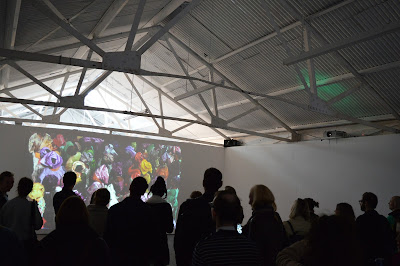 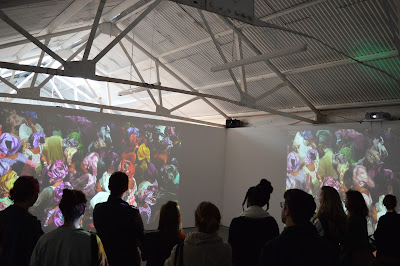 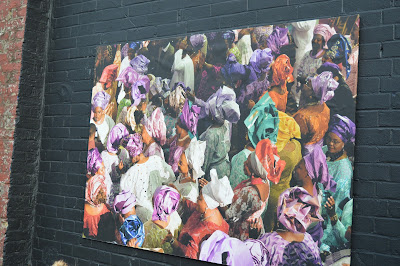 The new location for Bosse & Baum Gallery is in the Copeland Park courtyard, beyond the open doorways of workshops and studio stairwells in The Bussey Building.  To get there you will perhaps unknowingly navigate your way past various pastoral buildings along this path and Peckham's Rye Lane.  Churches are secreted away in nooks and crannies all over London, coming to life with cranked up volume of praise on a Sunday.  And this is the very subject of the latest show called "Congregation" commissioned by the community department at Tate Modern.  The artist Chloe Dewe Mathews has made the multi-channel video installation following on from a previous project of stills called "Sunday Service".  The footage "explores collective religious experience and specifically the nature of expressive worship in South London's African churches".  For the eight minute looped film Coby Sey  has scored a soundtrack to fill the converted industrial space which has coincidentally been commandeered from a Church.  The almost site-specific setting was integral to Chole's mission to reach not just visitors on the art trail but also the parishioners who frequent the area.  It will be open to the public each weekend with special events interspersed mid-week, including a panel discussion this evening:  "God Bless South London:  Faith & Place through the Artistic Lens".
Make your pilgrimage to this Tate off-site commission before 21st June.  Details here.
Admission free, Thursday – Sundays only 12.00pm – 6.00pm
133 Copeland Road, SE15 3SN
Posted by fredbutlerstyle at 05:05 No comments: 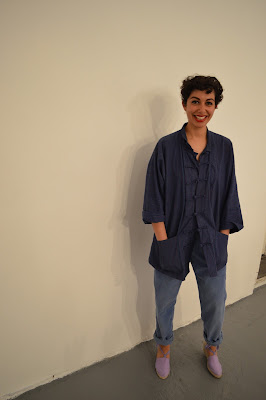 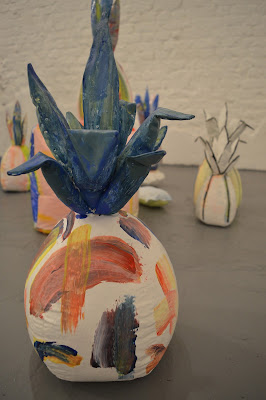 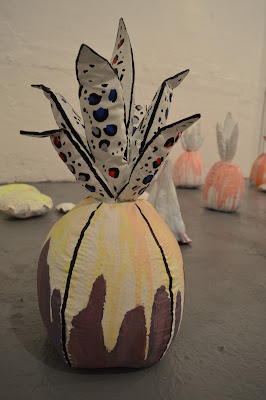 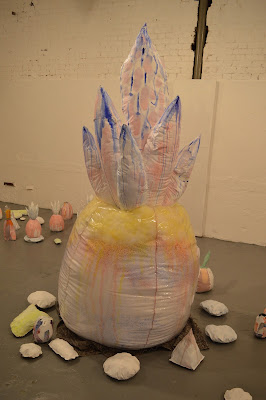 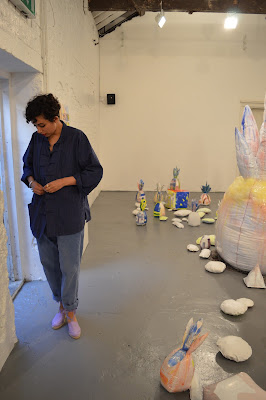 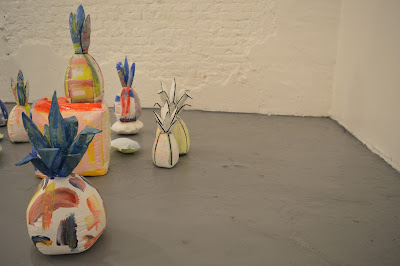 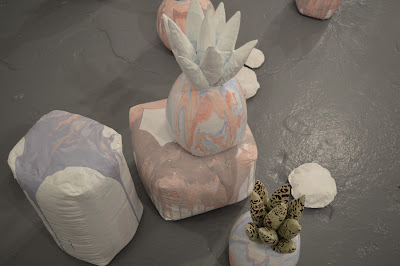 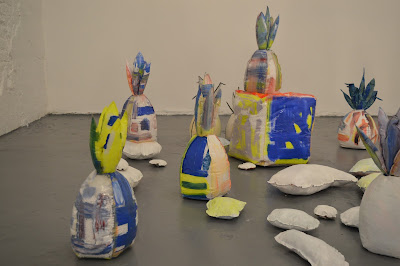 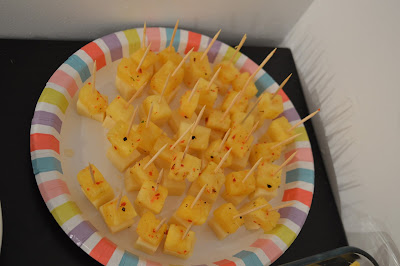 Congratulations Safia El Dabi on her solo show "Soft Sculpture" at the Depot Gallery where she deposited the fruits of her labour that have been stacking up in her studio over the last few months in preparation.  As she has sewn each one they have been stock-piling and filling up her work space so much that she said it feels empty now they've been re-homed.  Safia worked with Joseph Bond to curate the selection by splitting the sum of parts in two and laying out both ends independently.  Joe's favourite fruits and cubic cushions were of the poured pastel paint marbled variety.  Safia's side were the primary pigment brush stoke species.  In-between were some transparent PVC fabrications including the very centre oversize mountainous "Pretend Pineapple".   The mother of all pineapples!!!  A feat of engineering and harking back to the ginormous pineapple constructed from Kente fabric for The WProject.  Follow the evolution of Safia's morphing textile art via her Instagram here.

See some shots of her work in progress in an archive post here.

Private view pineapple based catering courtesy of the Little Cooking Pot.
Posted by fredbutlerstyle at 11:52 No comments: