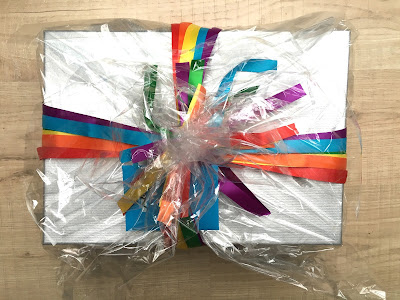 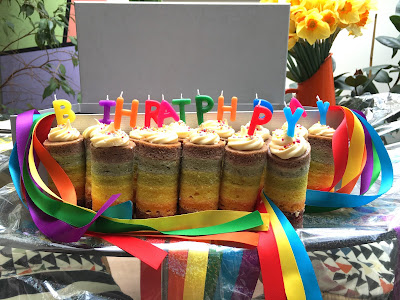 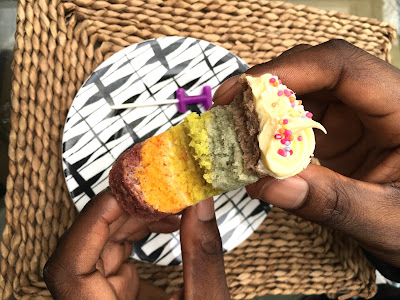 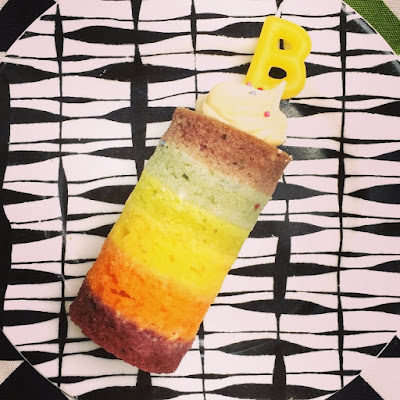 From one epic culinary tale to another - this immense rainbow cake by Lena.  It was delivered by stealth and hidden in my front garden by the secret squirrel a.k.a "NiceNutmegs".  The surprise of finding it was only the first wonder.  I cannot work out how she has made this.  Each cylinder is absolutely perfectly formed.  Each moist spectrum layer is sandwiched together with lemon icing to form the upright pillar.  All together, the letter candles spell out "HAPPY BIRTHDAY".  Even the package and wrapping is a work-of-art in itself with iridescent foil and multicolour ribbon.  It must have taken so long to devise and prepare, I feel incredibly honoured.  Lena is a LEGEND.
Posted by fredbutlerstyle at 04:28 No comments: 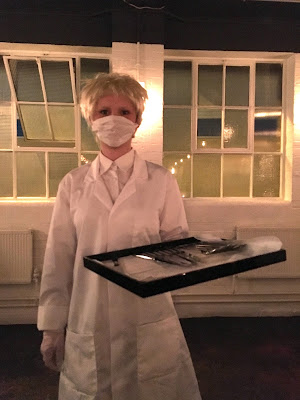 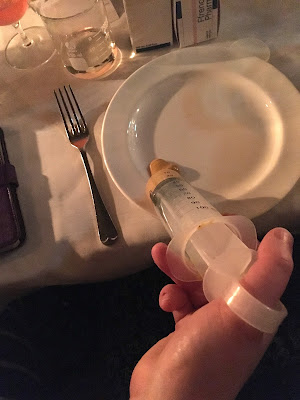 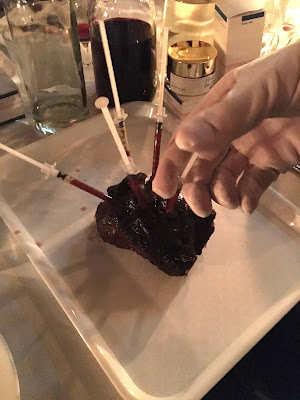 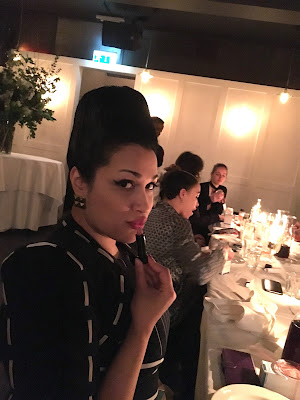 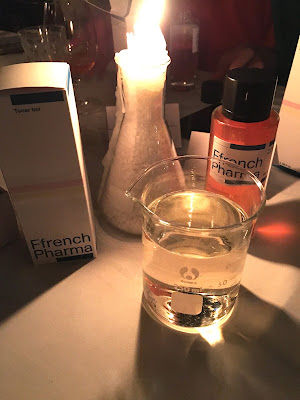 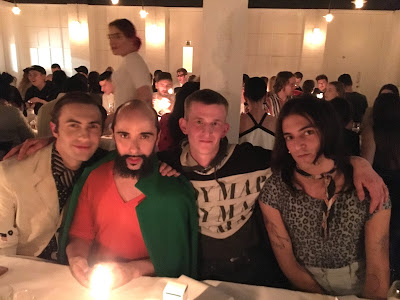 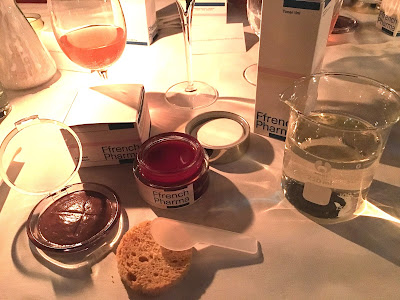 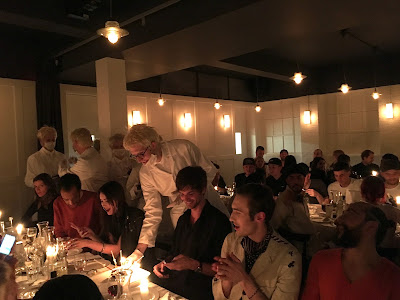 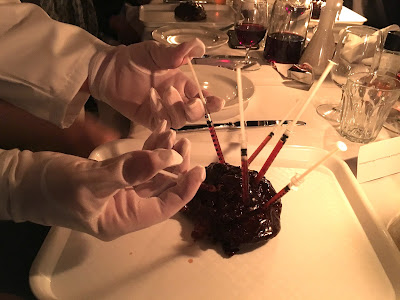 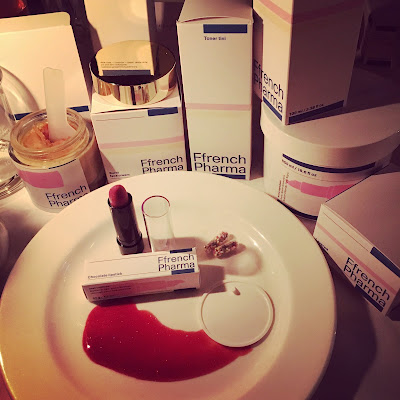 As we sipped apéritifs from conical flasks, distributed by waiters with bleached white eyebrows, we had a hunch that we were part of an experiment.  But there was no cause for an uncertain prognosis as everything had been planned to the smallest detail, measure and morsel.  Makeup-artist Isamaya Ffrench had teamed up with Bistrotheque for a concept named "Culinary Cosmetcs" and it did exactly what it said on the tin (jar and box).  What I had mistakingly confused as the launch for her own cosmetics line could almost have been understood with the slick graphic design and logo across the packaging.  The difference being that the recipes hadn't been tested on animals but were being trialled on East London's fashion press.  The blush compact contained no sheep's lanolin but rather Fois Gras parfait and the lipstick had no trace of whale blubber but a kick of chilli thru the white chocolate strawberry stick.  Infact the pudding is the best example of the level of intricacy poured into this menu of marvellous medicine as the transparent pill capsule contained multicolour anisEEd candy.
Like Alice in the Lewis Carroll plot, we read instructions on the labels of each product and drank Martini from a toner bottle and bit into a brioche facial sponge.  The funniest tongue-in-cheek invention was the "(Bot)Ox Cheek" main course which came with jus to be syringed into the flesh.  At this point I have to mention the side plate of Celeriac purée face scrub potted in a tub to be served with a spatula .  This is the tastiest treatment of celeriac I have ever sampled and totally blew my mind as much as the horseradish mustard condoment  that coursed up my nose.  I really, really, really want the recipe for this one!!  So delicious!
So that's pretty much most of it covered, apart from the Crème brûlée "burnt face cream" which had the caramel flambéed fresh before the gold lid screwed on the jar and boxed before serving.  A garnish of berry coulis all glittery like spilt lip gloss had to be licked off the plate, by which time all manners were well out the window after directions such as "smear evenly on tongue before swallowing".
I always like to keep the printed menu from events at Bistrotheque as a memento from each unique celebration.  After this banquet I swiped a complete medicine cabinet's worth of imaginary "Ffrench Pharma" cosmetics line.  Ive managed to sterilise the glass clean of beetroot collagen for preservation and potentially prosperity as Isamaya's career is sky-rocketing.  No wonder, when her talent is embodied in its own best branding, with a face of Brooke Shield's bone-structure.  It's almost unfathomable that a makeup artist can be blessed with both brain and beauty, but that's Isamaya ............ watch this space.

See an archive post from my first feature on Isamaya's makeup for Christopher Shannon in 2010 here.