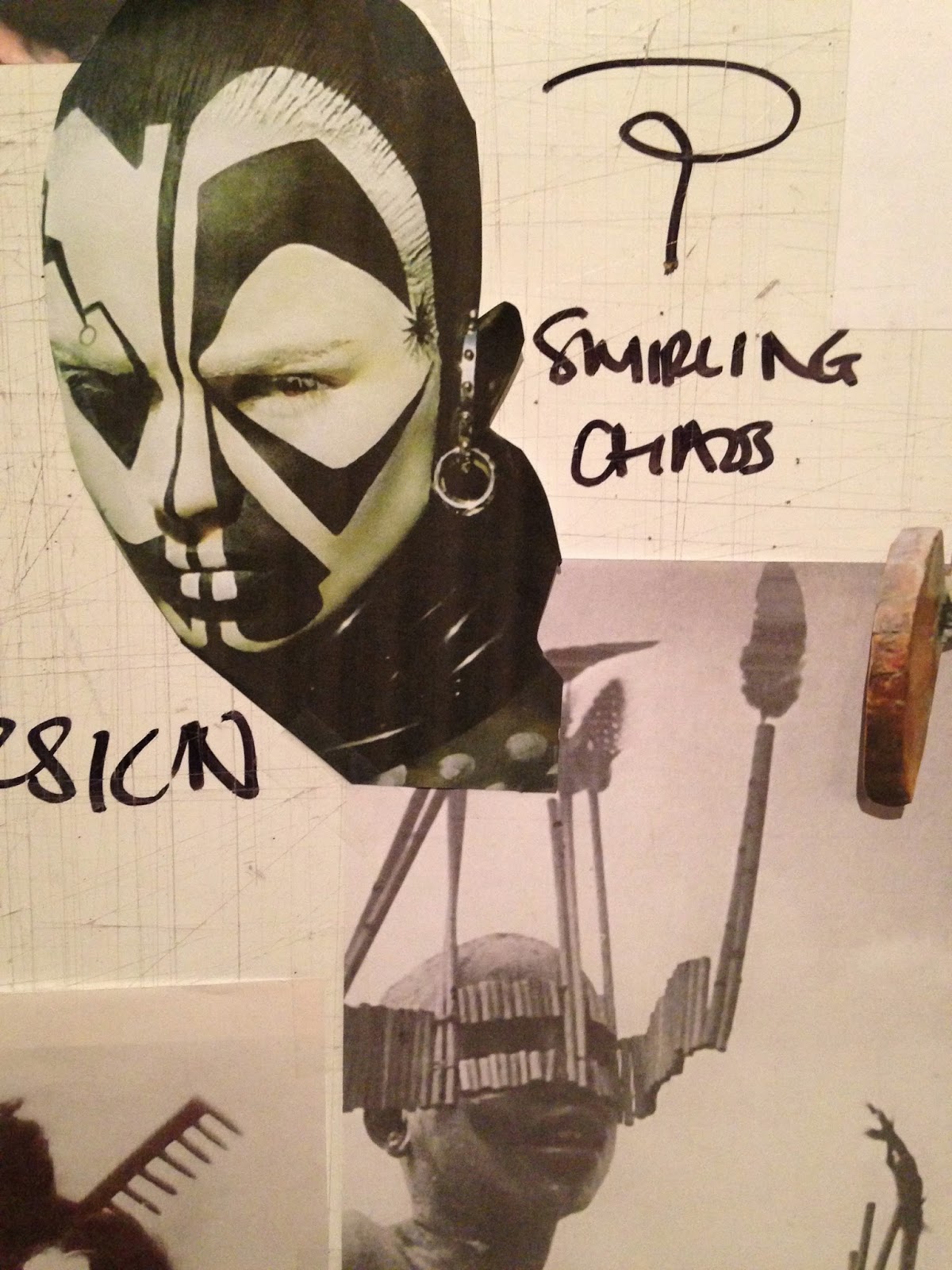 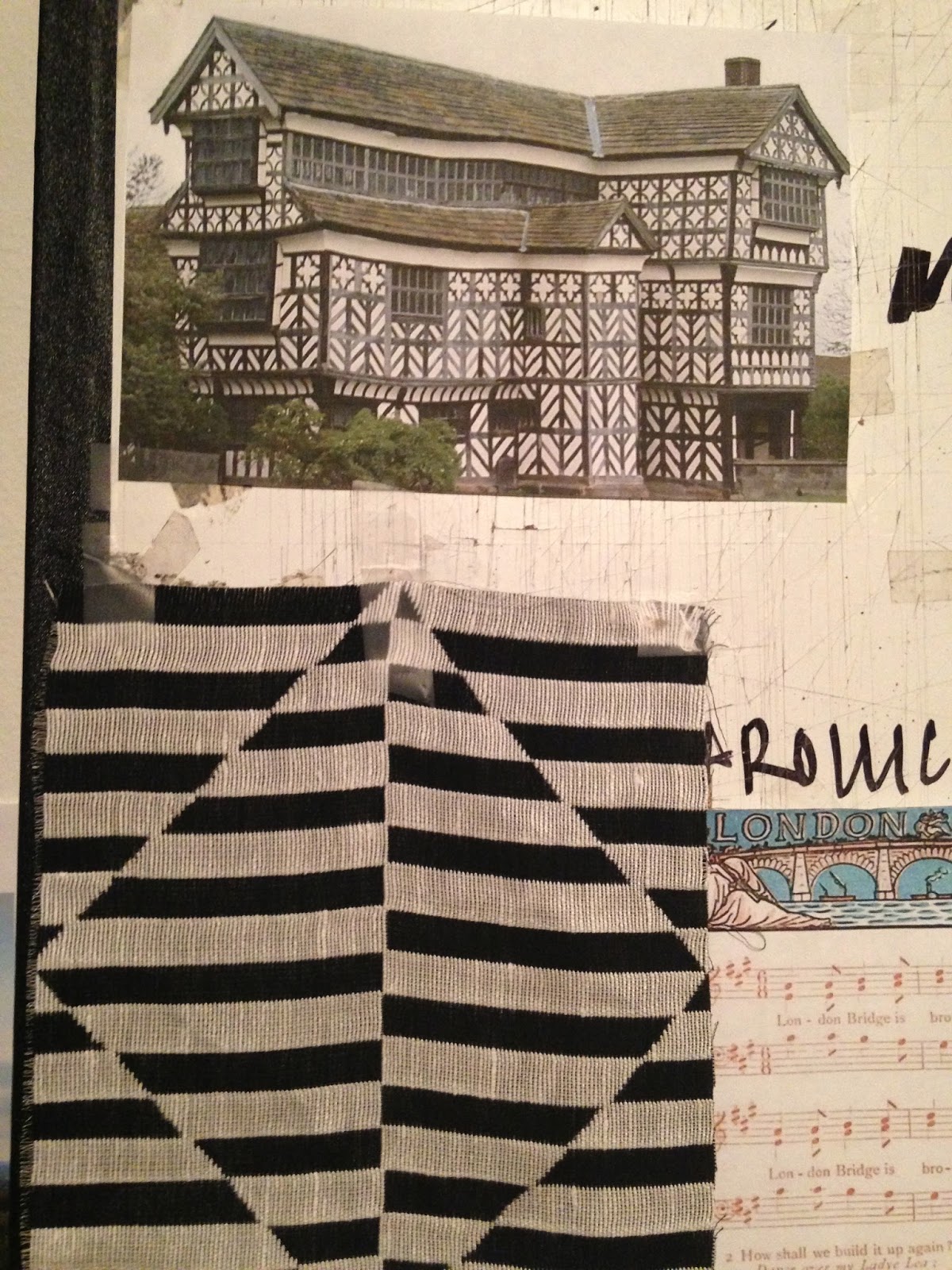 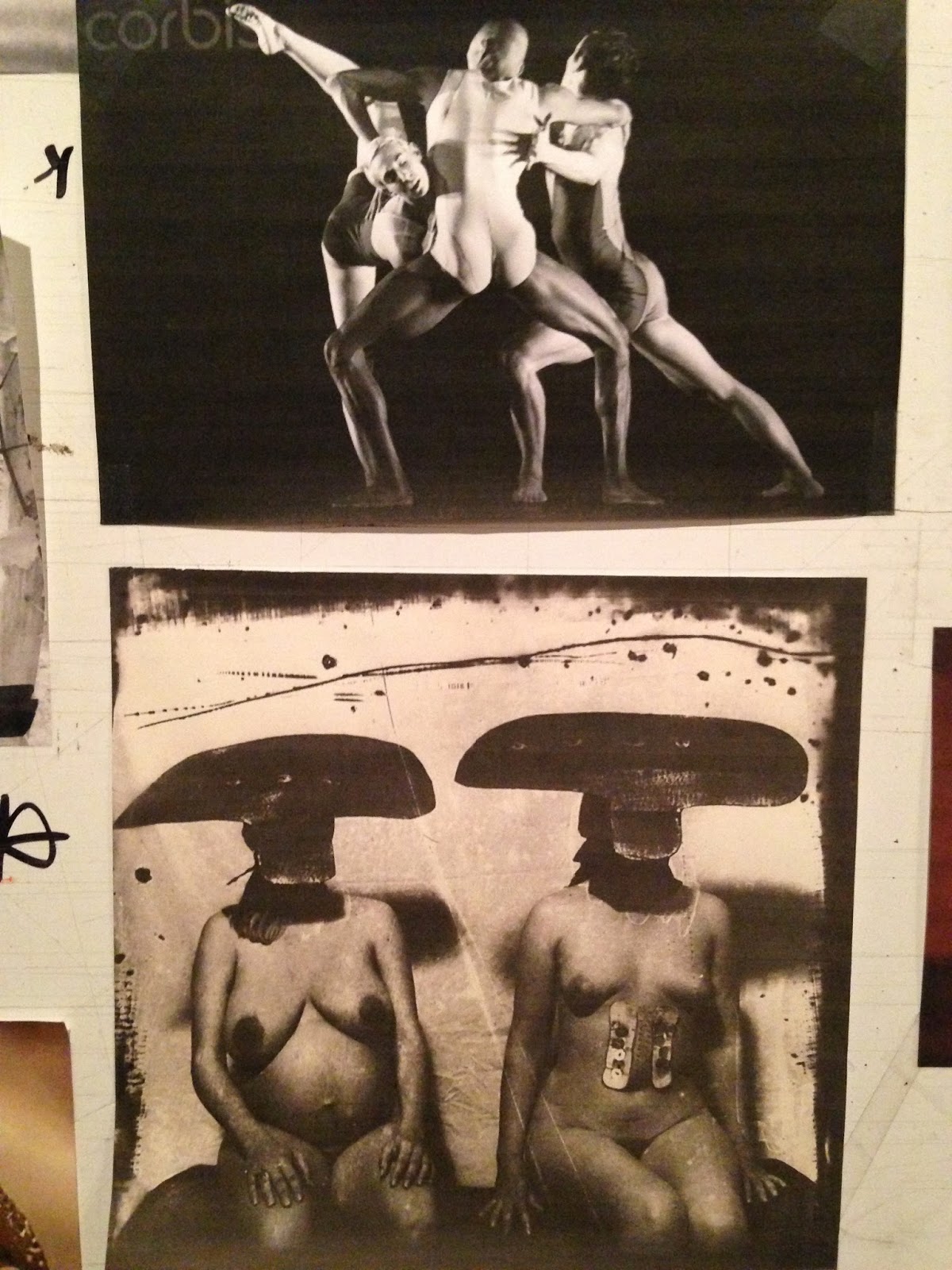 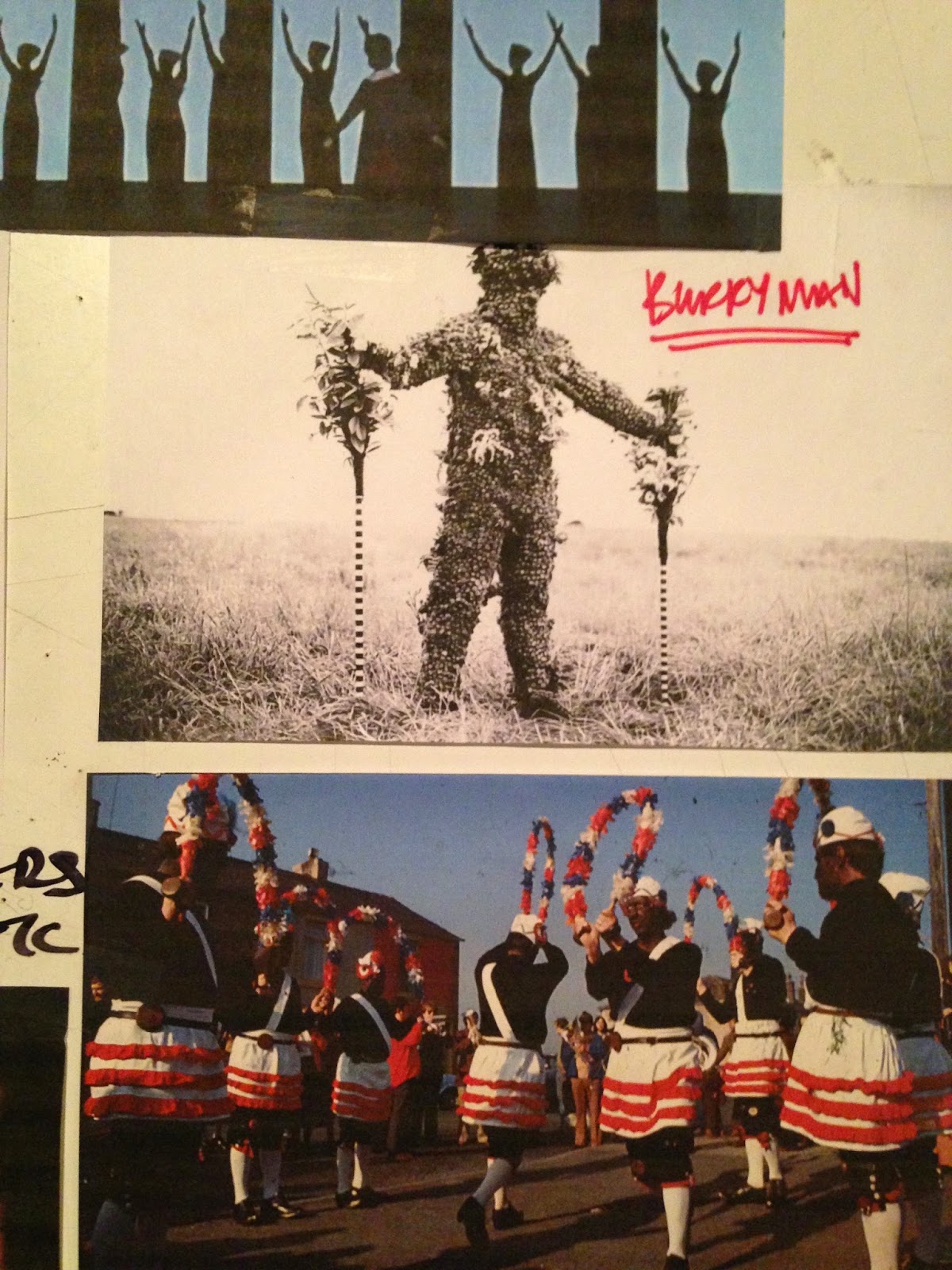 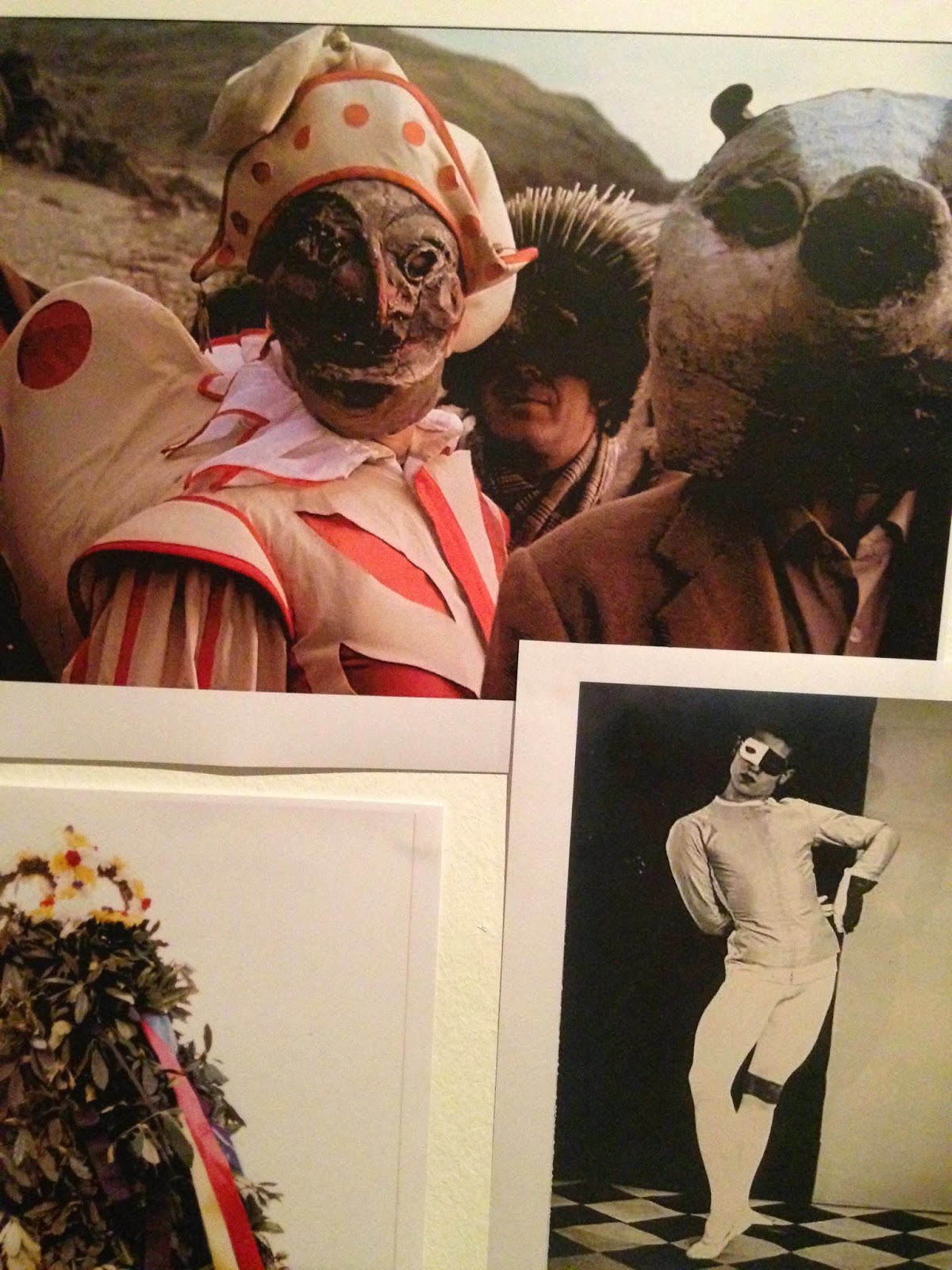 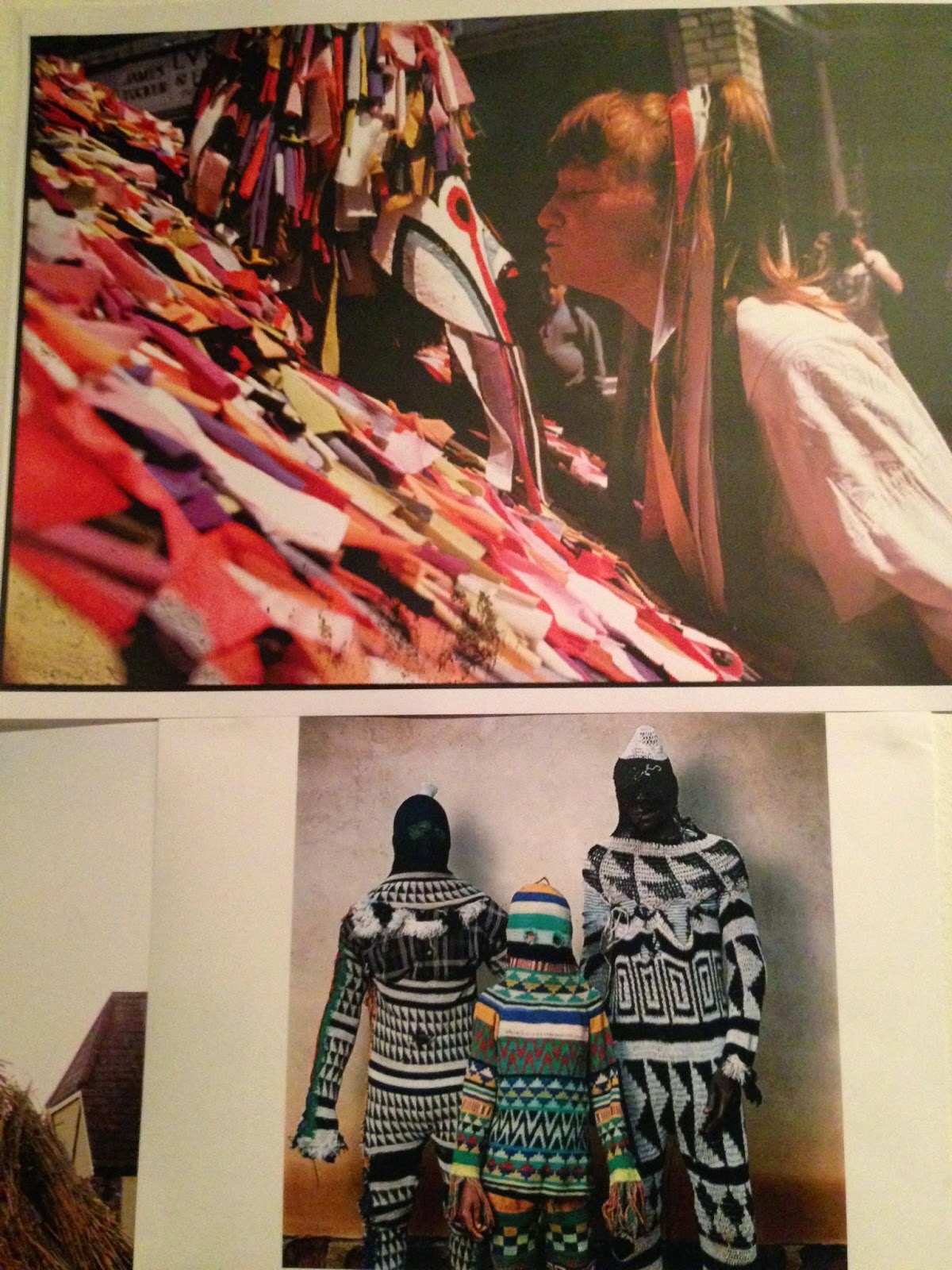 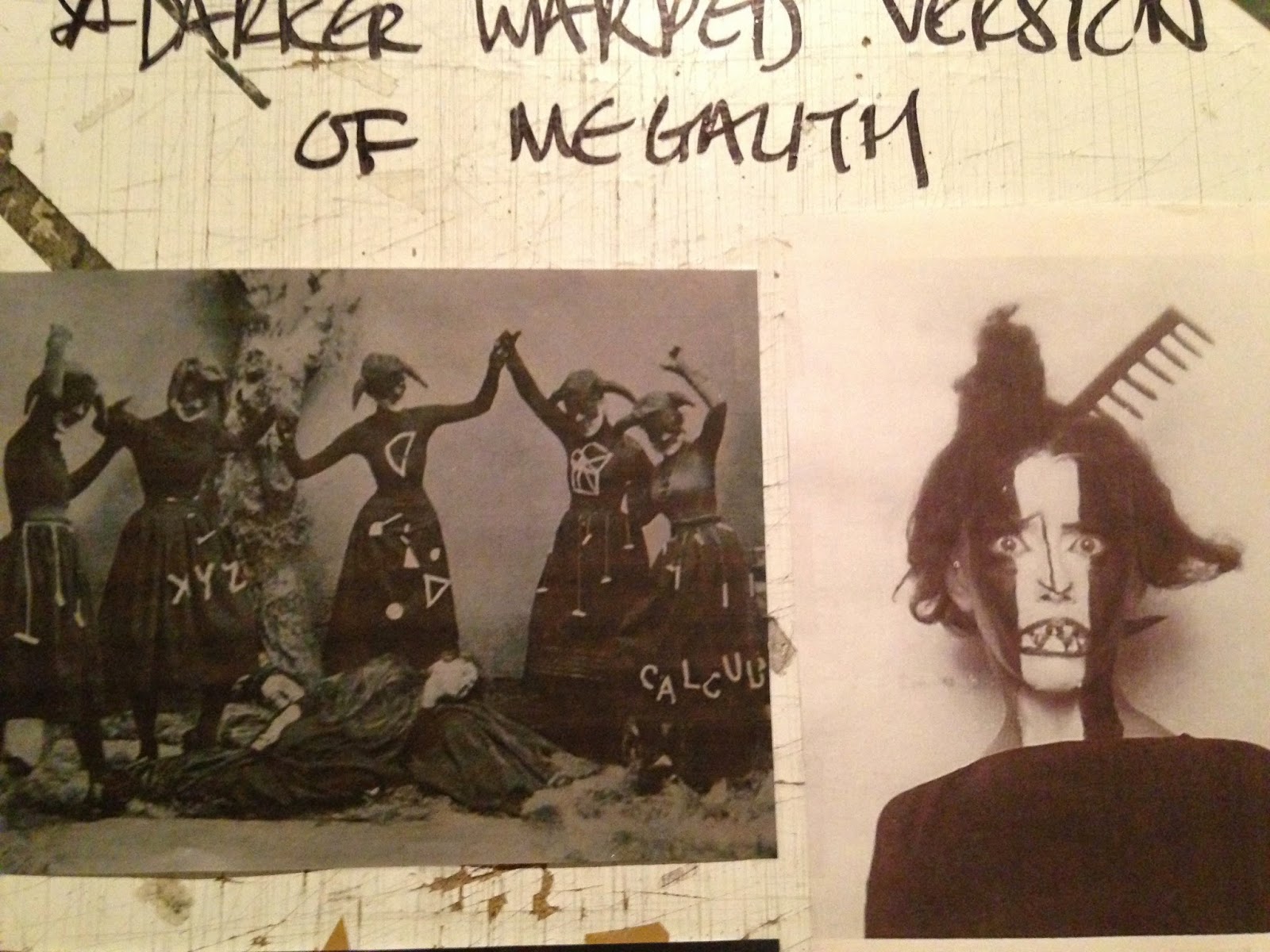 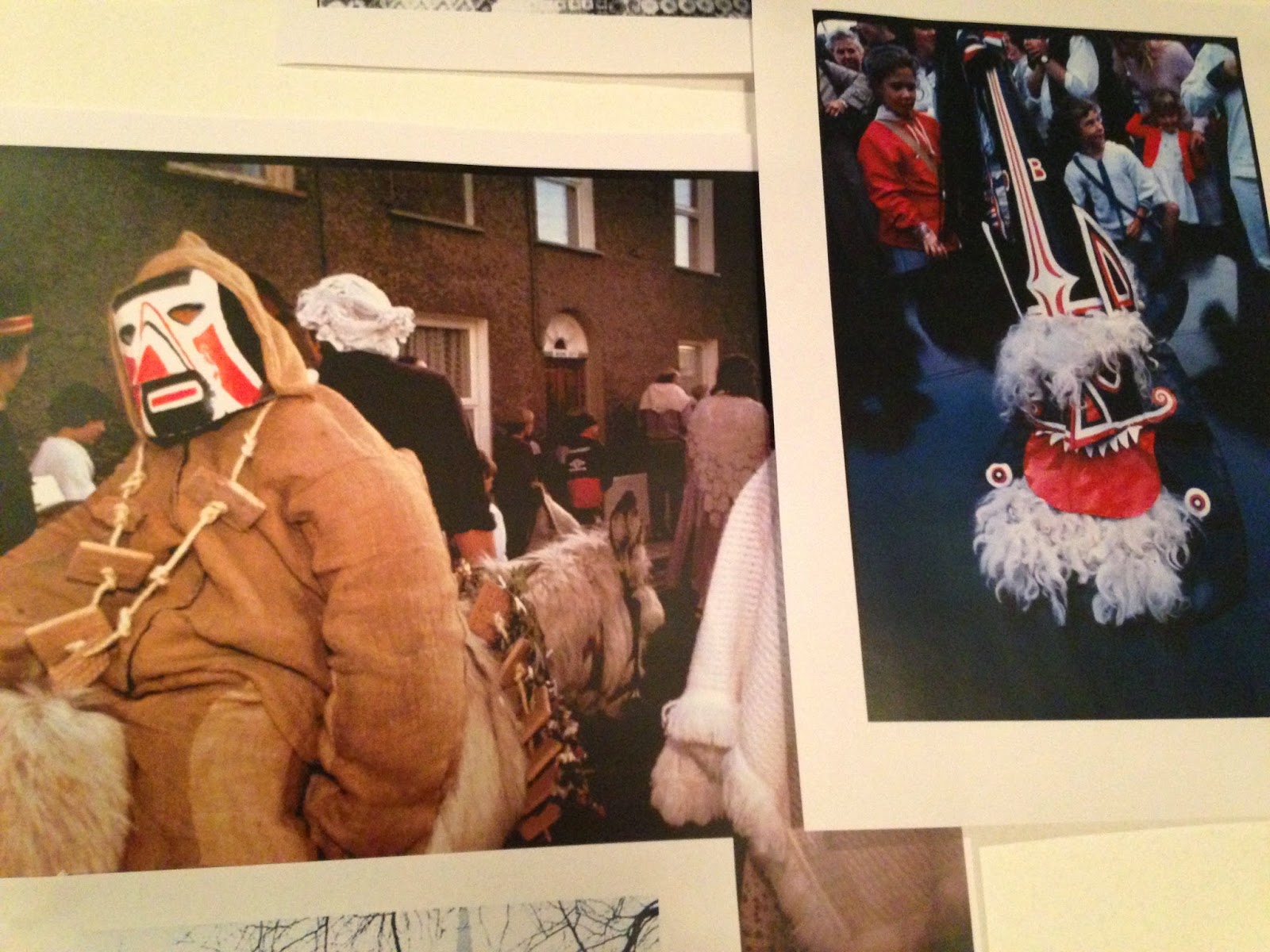 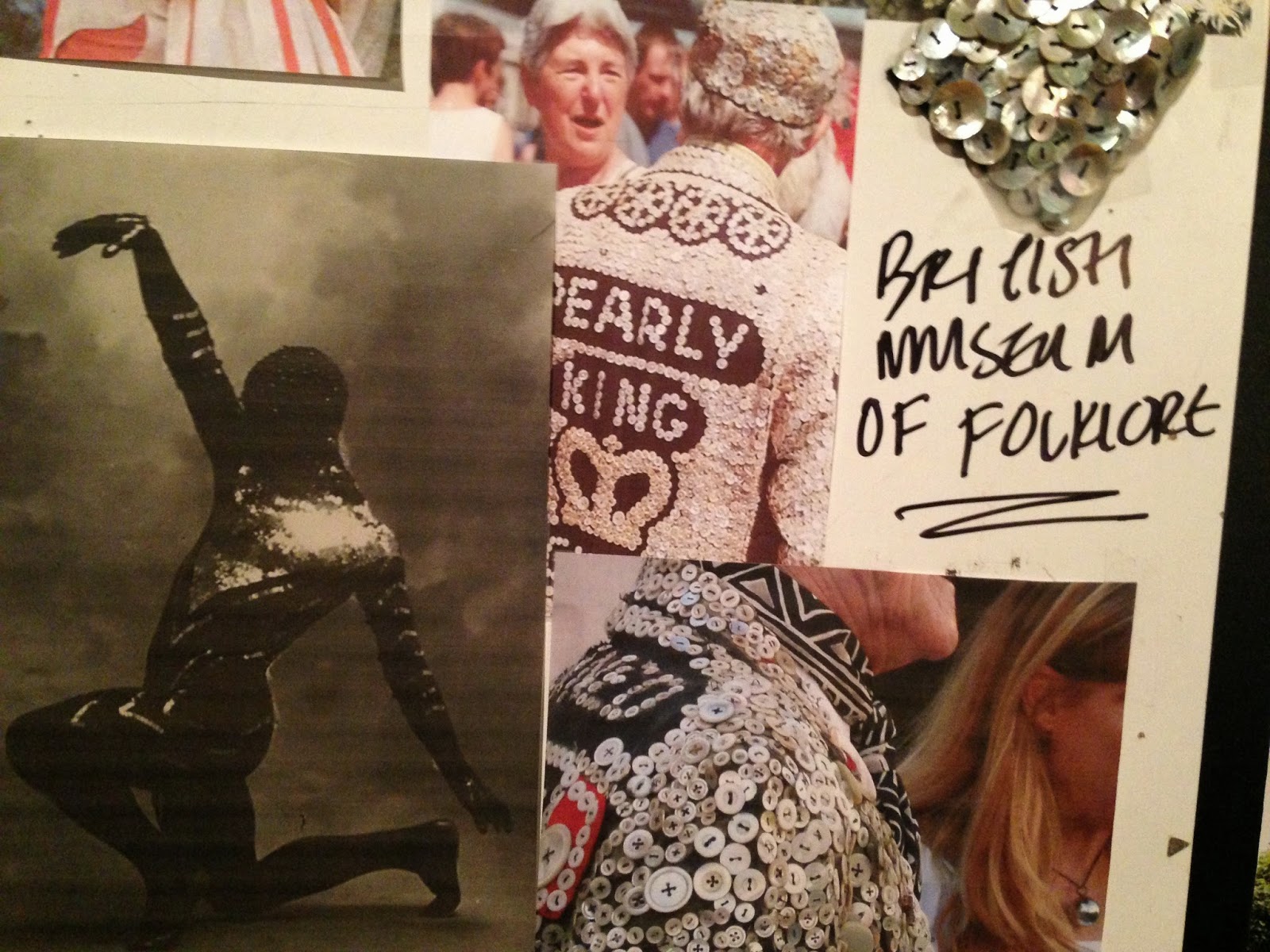 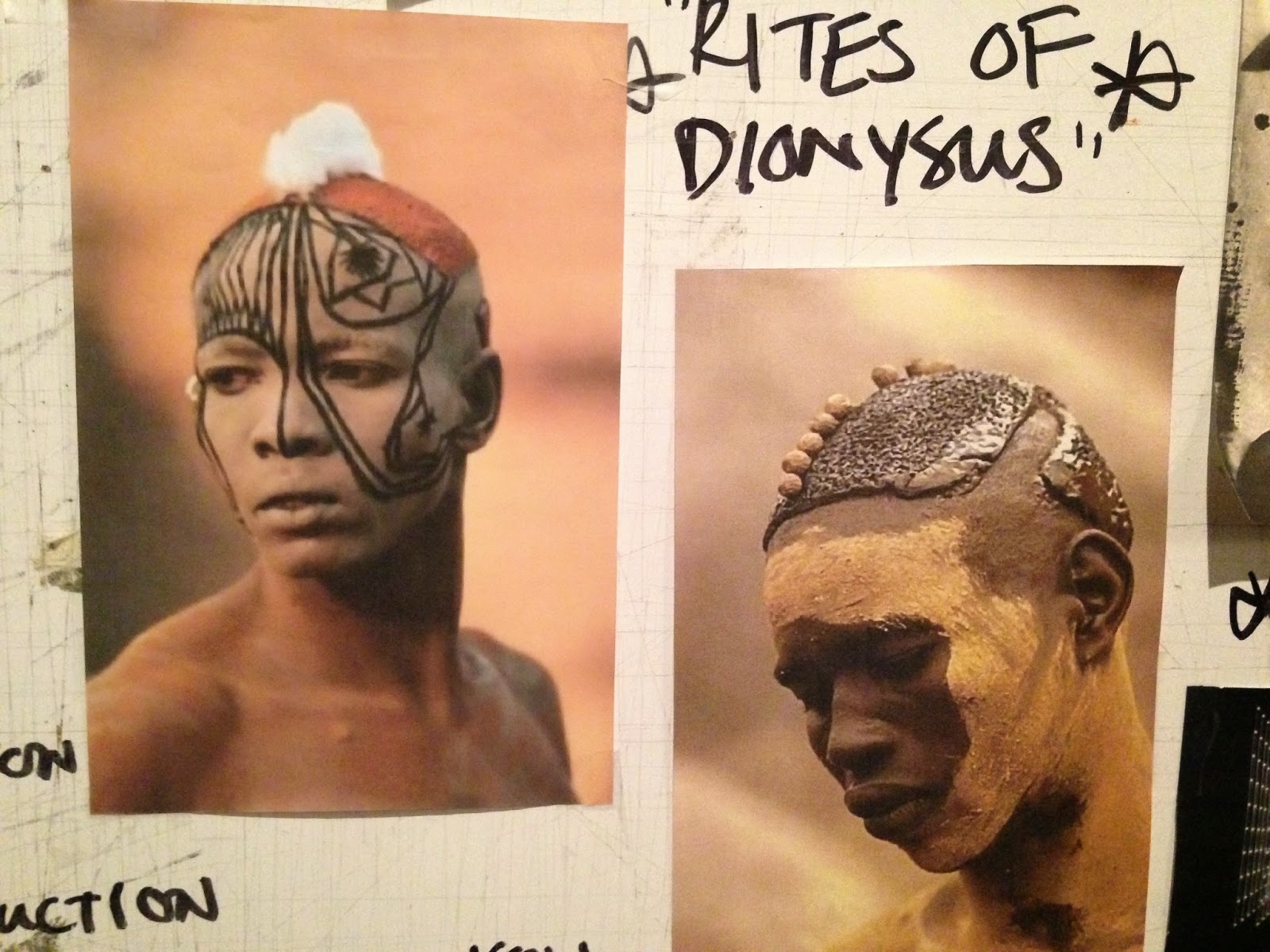 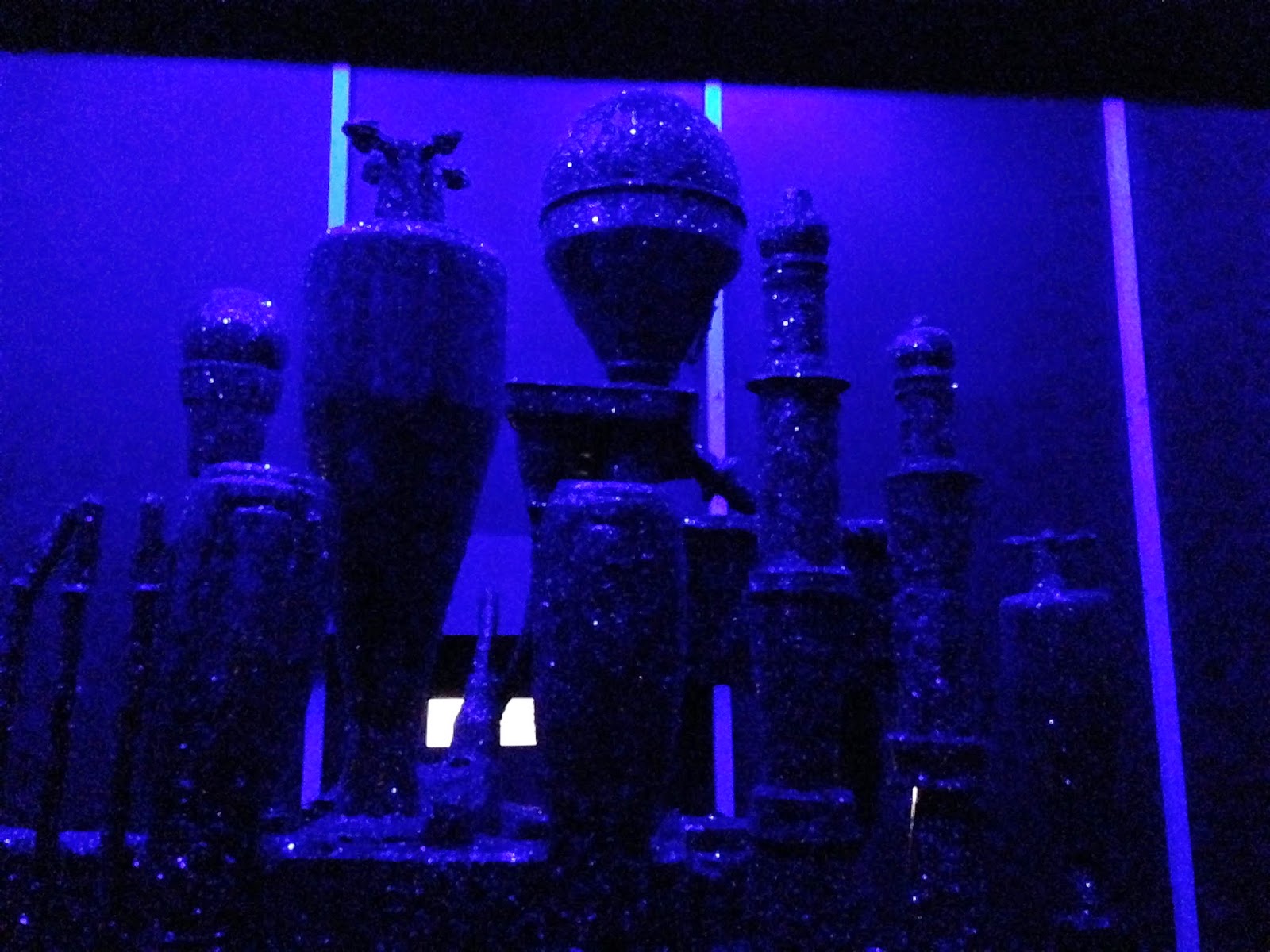 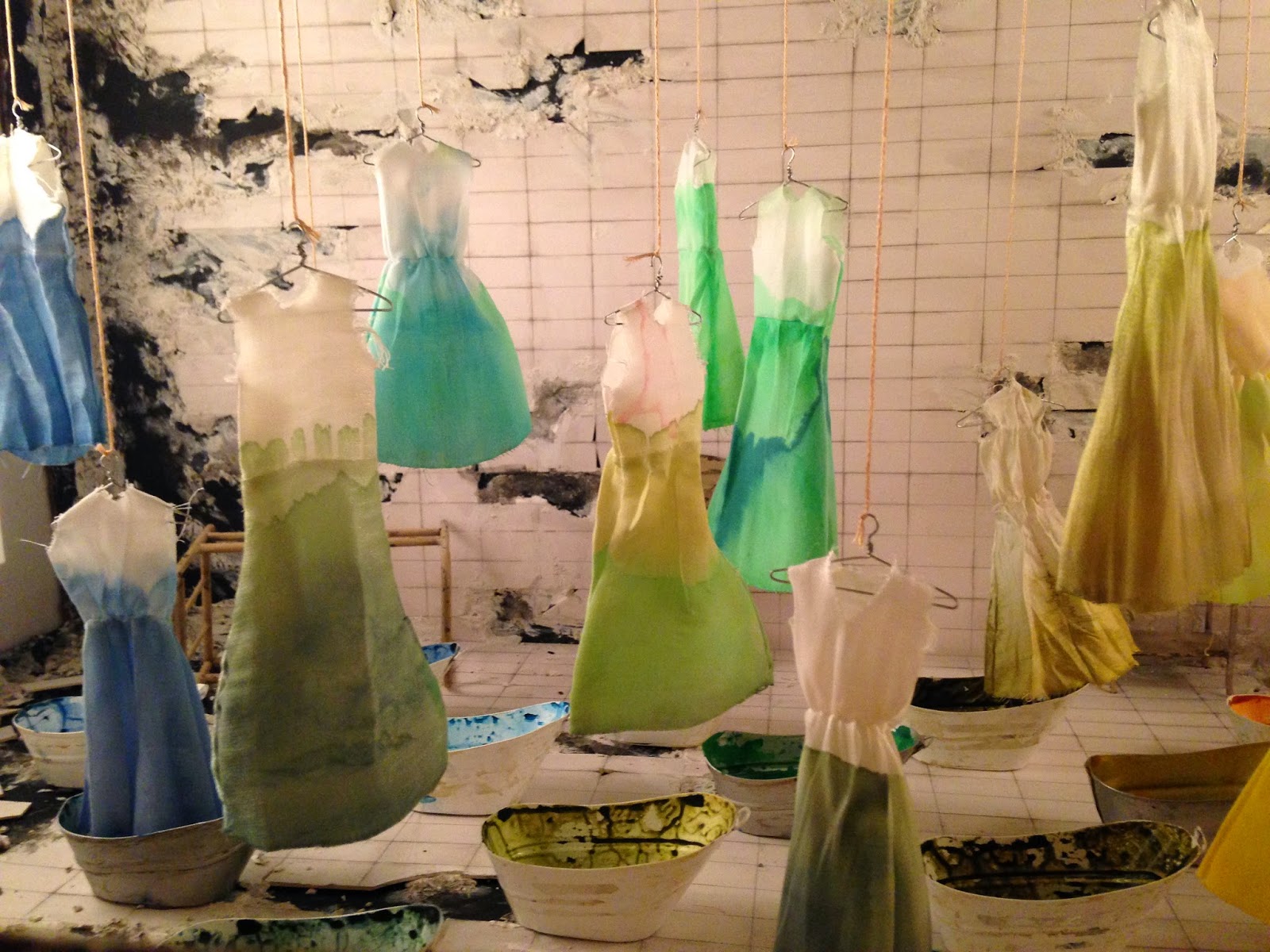 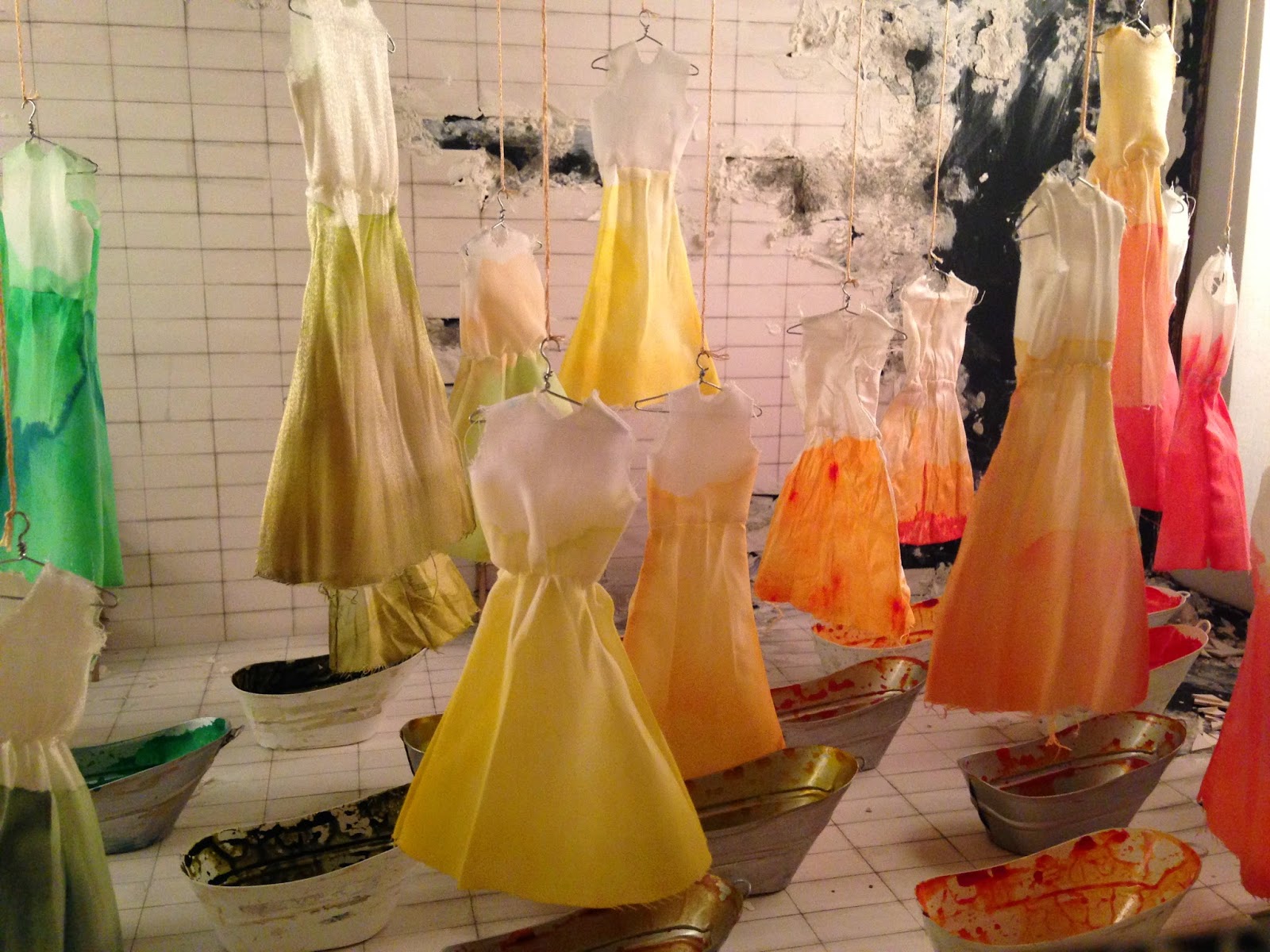 I have always been intrigued by Simon Costin's work for his crossover from accessory to set design, his epic art direction on runways with Alexander McQueen and in photography with Tim Walker ......... and more recently his work with his Museum of British Folklore.  The Fashion Space Gallery within the main Oxford Street campus of London College of Fashion just held a show to explore his vivid imagination via model sets of fictional concepts.  With no regular restrictions of production to consider he conjured up fantastical tableaus all presented as maquettes that you viewed thru peep holes into the miniature worlds.  His drawings and collages from sketchbooks were also on display which was the best bit for me as I love seeing artist's work in progress.  I recognised some of the photocopies from books out of the LCF library which is the most amazing resource to be able to trawl!  Next time you might be in central London remember to poke your head into the school to check out what free exhibition is on - all curated by Ligaya Salzar who has joined the programme from the V&A.
Posted by fredbutlerstyle at 05:11 No comments: 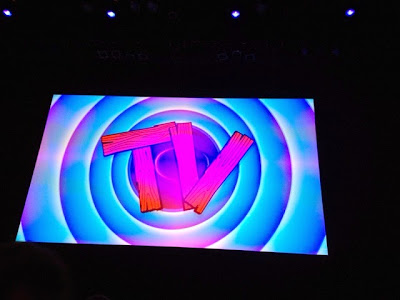 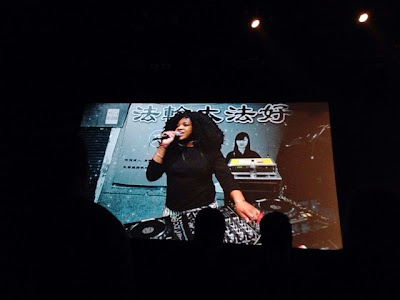 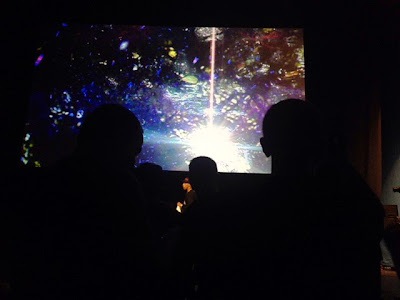 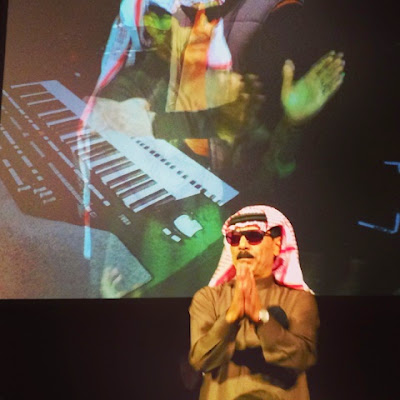 Something is brewing in the way we consume music, there is a shift, the world axis is tilting and times are notably changing.....................
I recently went to witness historically cosmic Afrika Bambaataa in conversation with Don Letts.  Instead of an educational exchange, Don was vocal in dissing and dismissing the emerging generation.  He repeatedly challenged Bam to identify a contemporary act doing anything as avant-garde as his pioneering movement from the 70's with Universal Zulu Nation.  There was an uncomfortable wave of shoulders rising and tuts of disbelief from the audience.  The atmosphere was so awkward I felt responsible for Bam's fans who had travelled from all over the UK for this massive failed opportunity.  Rather than tap Bam for memories of his formative years in Africa with Fela, Don was obsessed with debating if anyone was carrying on his progressive legacy.   We all wanted to raise our mitts and shout names of the new musicians who are boundary breaking their own break beat scene from the realm of online.  This new underground community is not only making music in bedrooms but also broadcasting live from basements.  Before Boilerroom two guys called Tim and Barry came up with a concept so renegade that the world is only just catching up with them and The Barbican has come on board to take it to another level.  ( Just Jam livestreams artists performing against a blue screen backdrop of psychedelic graphics reminiscent of the 90's late night TV show The Word.)
Last weekend The Barbican hosted a night for Just Jam to have a dual live event for both a physical and web audience.  An auditorium more accustomed to Shakespearean verse now hosted the rhymes of Grime MCs.    It was a surreal experience seeing Syrian artist Omar Souleyman sing to the crowd whilst simultaneously down the camera lens following him around on stage.  It was a bit of a milestone moment and we were all aware that we were sharing a piece of music history.  We weren't quite sure if it was right but it was bloody great fun.  The frustration of having your view of the DJ obscured by the camera crew was transversely better because you could also see a close-up view of their skilled hands blown up on big screens.  The stalls were a mix of some people still seated and others dancing in the aisles, with the occasional bewildered Barbican member in amongst the East London cliques.  The (just)jam packed programme brought together genres from London's ragga General Levy to Chicago's Footwork Traxman to Jersey Club's Uniiqu3.  The mix of melodies and technical styles were finally here after an initial cancellation earlier in the year from paranoid police plans reacting to a potential public security risk.  We were all pumped it was back on and that international artists were together in one room to be transmitted back around the world.
This night was evidence to prove what we all know is true.  There are portals and platforms of pioneering music making.  We are on the cusp of a meteoric big bang and there's nothing more intergalactic or Bambaataaesque than that!
Posted by fredbutlerstyle at 09:41 No comments: