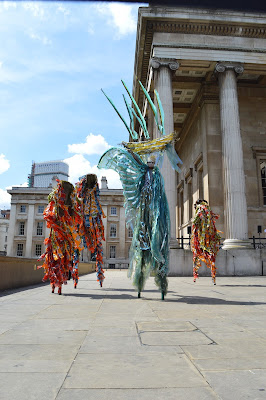 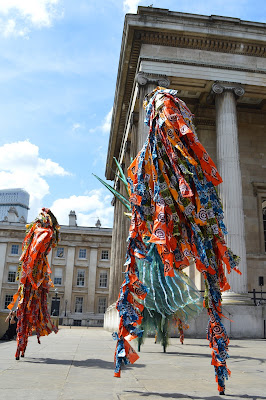 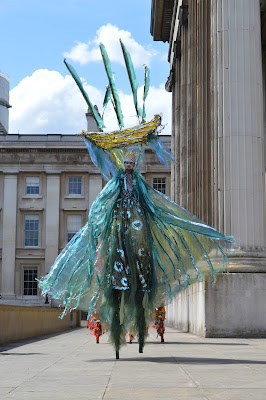 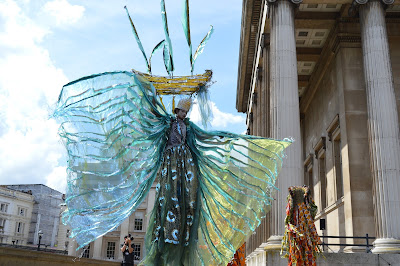 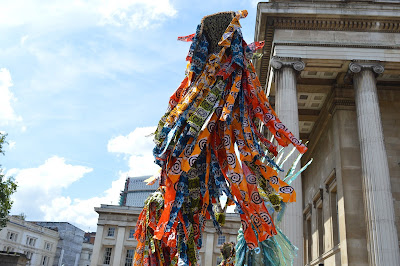 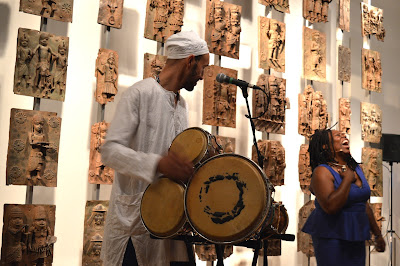 An insight into the spirit of Trinidadian carnival came to the British Museum today, in a special performance of Moko Jumbie stilt-walkers in conjunction with Zak Ové’s current installation.  TouchDSky's costumes are inspired by the traditional masquerade folk characters whose roots can be traced to West and Central Africa.  You can see the immense scale of the height of the acrobatic structures as they loomed high against the columns of the museum.  The sun came out perfectly on cue for the metallic materials to shimmer and bright patterns pop.  After dancing in the forecourt, the event moved inside the Africa galleries for musical storytelling "Tales of the Orisha: myth, legend and lore" from legends of the African diaspora which have lasted 400 years.
(TouchDSky's Moko Jumbies by Alan Vaughan, Story Telling with Jan Blake and Ade Egun Crispin Robinson on Bata Drum Percussion)
Posted by fredbutlerstyle at 10:35 1 comment: 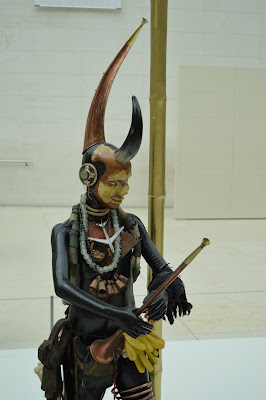 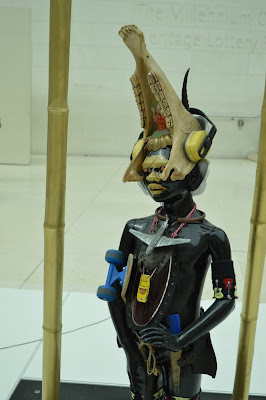 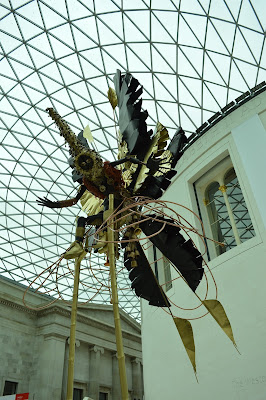 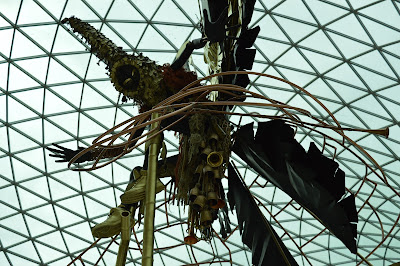 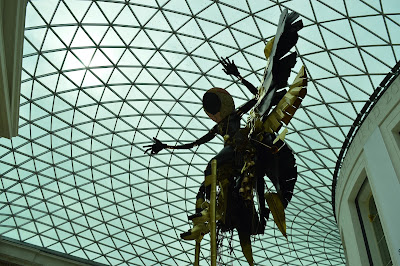 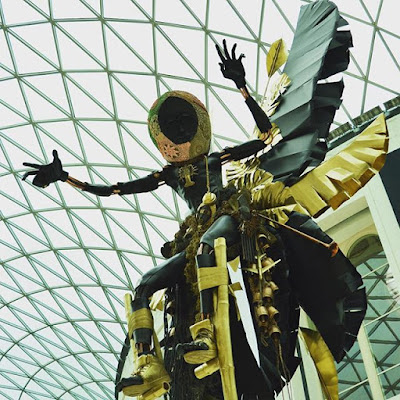 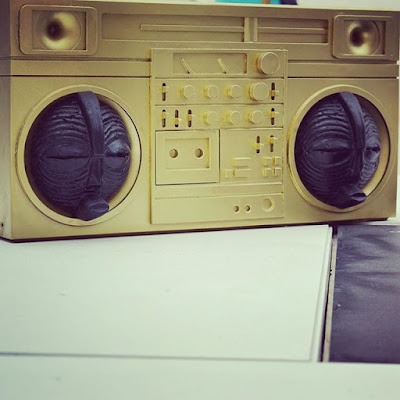 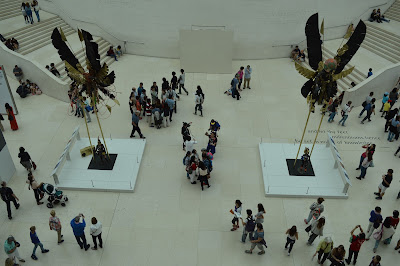 To coincide with Notting Hill Carnival, The British Museum have commissioned UK-Trinidadian artist Zak Ové on 2 epic Moko Jumbie sculptures installed as tall as the great court. The stilted masquerade characters are guardian spirits originally from Trinidad Carnival, representing African ancestry, celebrating African contributions to world carnival:
"Oral traditions describe the Moko Jumbie as a guardian of villages who could foresee danger and protect inhabitants from evil forces. Traditionally, Moko Jumbie figures wore long colourful skirts or trousers over their stilts and masks covering their faces. They were sometimes accompanied by dwarfs – represented in the installation in the Great Court by two ‘lost souls’, on loan to the Museum from Zak Ové – who provided a visual height contrast."
The Moko Jumbie's will later be installed in the Africa Galleries of the British Museum, Ové becoming the first Caribbean artist to enter the collection.  Here are the words from his gallery's page:

"The Moko Jumbie is a stilted spirit masquerade, representing the ancestors of the displaced peoples of Africa, appearing in times of trauma as a symbol of healing and protection. Being very tall, they act as sentinels, looking afar, anticipating danger and are a common sight at Carnival, Emancipation and Harvest festivals as well as other community gatherings.

Africans brought many types of masquerade with them to the Americas. Despite the oppressive nature of enslavement and colonialism, spiritual rituals were disguised in masquerade and survived through incorporation into European carnival celebrations.

Masking for Africans in the Caribbean is a way to connect to ancestors and nature as well as notions of ‘home’. Masks can also be playful, frightening or a covert way to criticise ruling powers, and masking traditions like the Moko Jumbie also act as a vehicle to openly celebrate African ideas of beauty and creativity.

Ové works between sculpture, film, painting and photography, often collaging the various elements using found, cast and recovered materials. Interested in reinterpreting lost culture and mythology using modern and antique materials, he pays tribute to both spiritual and artistic African and Trinidadian identities which have been given new meanings through Trinidadian carnival and the cross cultural dispersion of ideas.

A constant theme for Ové is the emancipation of personal existence through incarnation with an ‘other self’, highlighting the power of play to free an individual from the contained experience of one’s identity.  This idea is filtered through his own personal and cultural upbringing, growing up between London and Trinidad with a black Trinidadian father and white Irish mother."

Posted by fredbutlerstyle at 05:38 No comments: 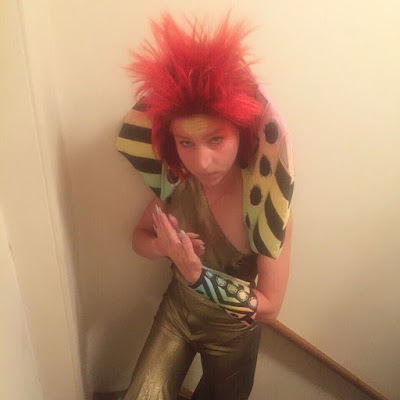 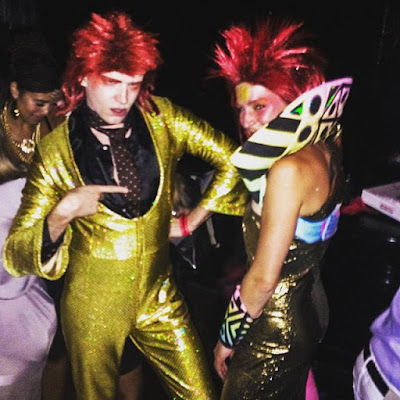