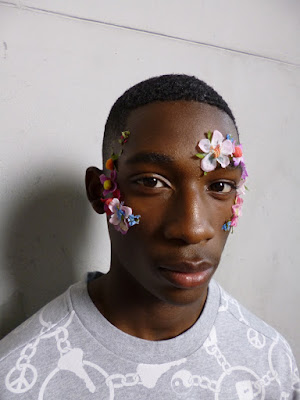 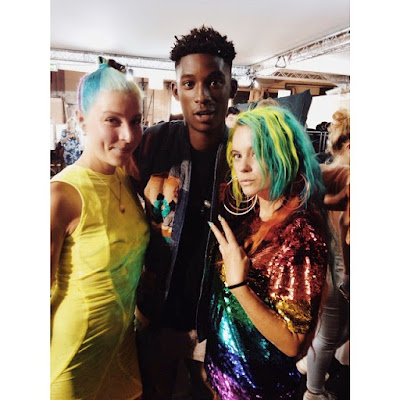 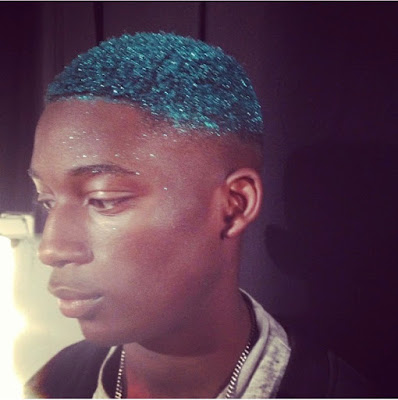 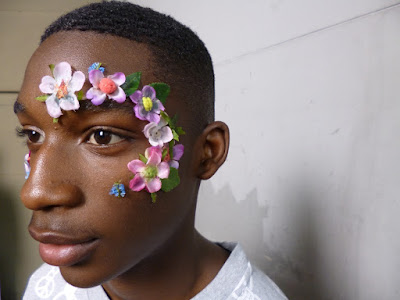 I absolutely love the opportunity to photograph backstage at fashion shows; to capture the details in the hair, beauty and garments that you can't appreciate on the runway.  However its tricky because of the high-pressure environment of models either running in from the previous show or running off to the next.  They are usually on high-alert, not to mention all the teams responsible for getting them in place to walk out on time.  So breaking up that nucleus with a lens as an invading stranger to the system is a strange dynamic.  Backstage photographers aren't wanted by anyone and although its a necessary evil for PR purposes, noone holds back in making you feel unwelcome.

That is, for the occasional pearl nestling in the grit.  Here is model Harry Uzoka who I got to know over the seasons of London Fashions Mens Collections because since I first stopped him for a close up at Christopher Shannon's show in 2013, he always remembered me.

In the fashion world people either avoid saying hello because you are deemed uncool and association would bring them the same doom or transversely fall over themselves to get close to you if your'e the current "one to watch".  However, there’s a slither of the community who are genuinely unthreatened enough in there own self-esteem to be human and communicate outside of this sleaze.  There's also a remaining 2% that are new to the game and probably too naive to imagine such a bizarre code of conduct.  Harry fitted into both of the latter.  He was out on his own cosmic trajectory, untouched by the bullshit despite having started modelling young.

When I found out about his death at the weekend I was deeply, deeply shocked and saddened.  I described him as a "special soul" and when I looked up the news story it turned out that I wasn't the only person to use this description.

It's not just a tragedy that a promising and positive young man was taken away too young in an unnecessary act of violence but the thing that's upsetting me is also for his family.  As testament to his open and natural nature, he must have been brought up with unprecedented care.  He had the manners to raise above his environment and always be the best the version of himself without fail.  He would always call out to me, make time for me, be patient and leave me with a spring in my step.  No agenda.  He was just a shining light.  A special soul.