Bistroteque hosted a fish'n'chips dinner to celebrate former chippy Agyness Dean's Icon Issue of i-D with 6 collectable covers. The restaurant was crammed with eager takers like a rowdy school canteen. Probably due to the limitless cocktail menu that featured special sources such as "Aggy on the Rocks". This portrait was taken by her boyfriend who mixed up the roles by turning my camera back on me .............hence I have cropped myself out! But here is one of my pics of Judy Blame who made an eyepatch for her in the Tank Girl shoot similar to the hat he was sporting last night. 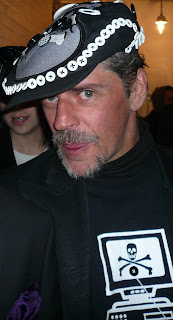 Email ThisBlogThis!Share to TwitterShare to FacebookShare to Pinterest
Labels: http://www.bistrotheque.com/