A few of my favourite things aligned one day when video directors Colin Henderson and Daniel Brereton worked with stylist Kim Howells to shoot Golden Silvers for their new single noir thriller "True Romance". With all these elements in the melting pot, the elixir was surely going to be medicinal magic. And so it is, if you need a fix of giggles for your funny bones, tune in. This is bloody hilarious!
I got in touch with Colin and Dan to find out how the collaboration came about. At the initial meeting they discovered a mutual appreciation for all things pop and Prince relate,d which gives some indication to the purple hue of the set. The concept of their direction was to have the band performing on a fictional foreign language TV show. By researching videos of music shows from around the world, from the past and present, they decided to create a fictional country with it's own language. To illustrate this, watch the outtake footage here of the presenter Gabriel. The other stop-motion film below is by the band's resident photographer Graham who mixed his backstage snaps to the soundtrack of the single's remix by Michachu.
If the green makeup reminds of you a certain genius video for Metronomy, there is no coincidence. In addition to Metronomy, the duo have also art directed the likes of Late of the Pier, Esser, Best Fwends, These New Puritans. This is the 1st feature that they have shared directorship and when I asked them to list their future dream clients a mix of Girls Aloud and thecocknbullkidd arose...............so watch this space!
These outtakes were kindly sent to me by the guys (http://y-o-tube.blogspot.com/). Check http://goldensilvers.co.uk/category/video/ for news from thier recent world trip and further details.................... 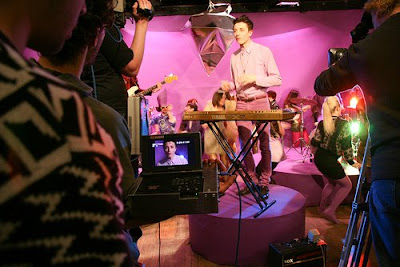 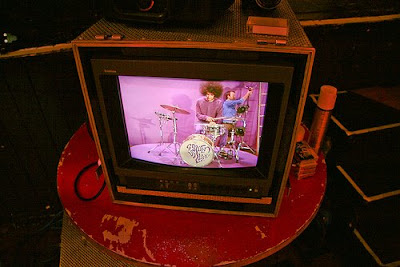 Making the Video - "True Romance" by the Golden Silvers from GT on Vimeo.

Email ThisBlogThis!Share to TwitterShare to FacebookShare to Pinterest
Labels: http://www.yofest.co.uk/