Sun 28th Feb: Piers Atkinson "Its Later Than You Think" 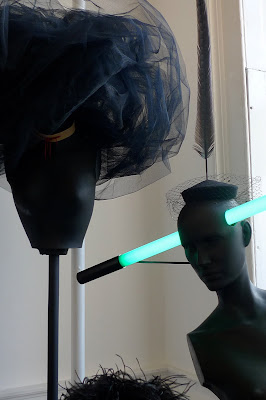 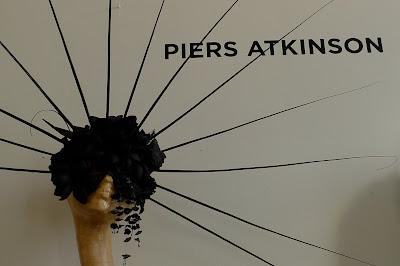 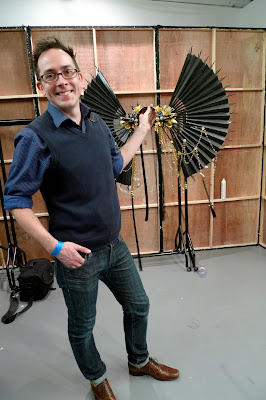 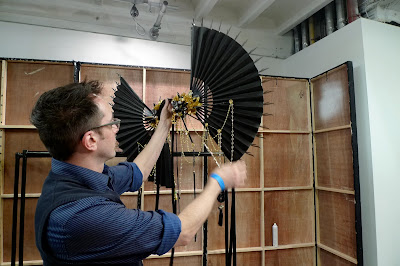 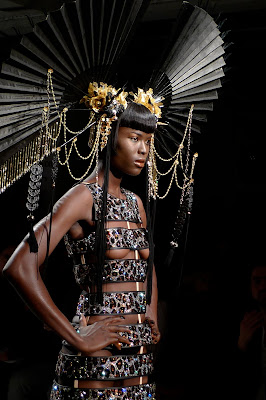 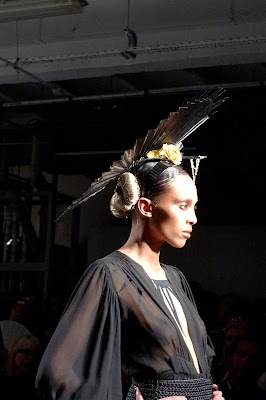 Last season the 25th anniversary of London Fashion Week was opened  with a special reception and millinery showcase "Headonism" hosted by Stephen Jones.  In conjunction with Stephen's anthology exhibition at the V&A, the curator had invited 5 of the new generation to take part in a revolving runway presentation.  A section of Somerset House was also designated to give space to these creations for the rest of the week.  Fortunately the BFC decided to resurrect the stand for a second season and give support to the capitals top hat makers for A/W 10.  I popped in to catch up with Soren Bach and spot a fetching Noel Stewart assistant sporting a new knitted piece.
Here are a couple of images of Piers Atkinson's installation which the door opened directly onto and the sun streamed into.  Mannequins were customised by art director Alun Davies and gave an atmospheric base to display his new macabre models.  Piers theme for next Winter has taken a sinister  side-step from his previous bride-to-be muse and imagined a fictional weeping widow.  But in true Atkinson style, its executed with a cheeky wink to those in the know and nod to that quirky milinery industry sense of humour.  .............its one feat that the few hat makers are a rare breed of gifted patient craftsmen but it is also a given that they have an inbuilt terrific wit.   With this in mind, Pier's widow is one that is unapologetically enjoying the untimely demise of her spouse and revelling in her first foray of a new found freedom.  There is a focus on the classic funeral veil but reinterpreted to contemporary effect such as the explosion which disguises the wearers face behind a smoke screen of net (the "Persephone" seen here) Its a 36 style collection, each named with an affectionate tribute to divas such as "The Crawford" and "The Kitt".  I'm loving "The Marlene" Mantilla afro comb with thigh length veil with pom pom trim............
...........which leads me to the final images of the fan style head pieces that Piers created for J.Maskrey's show "Pleasure" based on a 1930's film "The Mask of Fu Man Chu.  Here is Piers backstage with the showpiece that was modelled by my fave girl Tracy Onyekachukwu as cast by Judy Blame who styled the show.
Through Blame, Piers has met expert badge maker Karlie Shelley who has teamed up with other designers such as NOKI, Louise Gray and Jeanette to make unique pins.  The two have taken the sharp motif of Pier's mainline and produced leather and stud circles for an accessible Atkinson statement.  Check out the site for more........
You can also watch a film of "Its later than you think" to see that hats in motion here, directed by Ben Charles Edwards.
Posted by fredbutlerstyle at 08:39

I wish I could find a way to get a neon tube through my head....