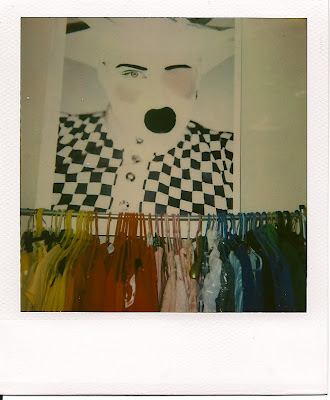 So exactly one week after my entry about wishing that Jeffrey Hinton's footage could be seen again............hey presto..........the angels answered my prayers. Or more correctly, Diane Pernet answered my email. I thought she might be interested in the footage and I couldn't have been more bang on with intuition. She has programmed 3 of Jeffrey's films into the presentation of her next Mr.Pearl documentary as part of ASVOFF at the end of September. Jeffrey will also be there to give a little introduction to his work and answer any questions. If you go over to Diane's site you can see some stills of Leigh Bowery, Body Map and David Lachapelle.
I find it really hard to legitimise leaving my studio and stop working, but I had an inkling that packing up early last Friday and racing to the NPG was the right thing to do...................its so lucky I did go and now these fantastic images can be shared for all to see ...........now lets make another wish and hope to see some kind of Bodymap reformation.........
I can't wait to go to Paris for the preview. My best friend in Paris, Alistair Carr is also interviewed in the Mr.Pearl documentary so it is going to be a really special event (if he can leave the Balenciaga Atelier just before the eve of their S/S show?! All 10 fingers and 10 toes crossed............)

This image is a Polaroid of my bedroom in Hackney from 2003 when I had just schlepped my Nick Knight print back from SHOWstudio on the No.55. Can't believe I did that now (even though I still can't afford a cab) and I can't believe I had a gold hanger in the pink section of my rail! Massive oversight!