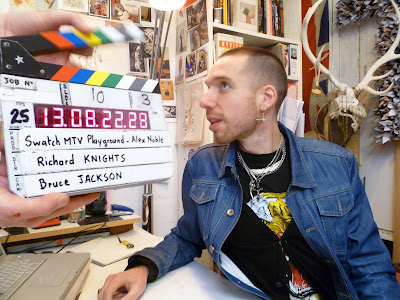 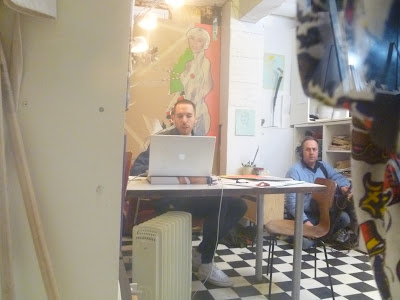 Here you can see Alex Noble in his studio ........... with a sound-man hiding squatting in the corner. That's because I snapped this on a visit when he was filming an interview for the introduction to his guest editorship on SWATCH MTV Playground. We have both been appointed to share the post which takes over from the first contributor Rankin. Four different artists will be covering the position during the year but Alex and I are lucky enough to be sharing this stint so we can both squirm together in looking at ourselves on film. Having said that - they are really well produced pieces of footage capturing an important time in our history - both being on schedule at fashion week. Check out Alex's enlightening, endearing and intimate film to find out his complete story and how he navigated his way through the industry to arrive back at his initial childhood dream job ......... just like me - SNAP!
Keep a close eye on the MTV Playground blog for our different articles and posts being uploaded ........... here is my first.

Thanks to all the team at MTV for being so lovely to work with!! Apologies to the director and DOP for the occassion I abandoned them outside the David Koma show at Somerset House........ I took the "act natural" thing a little too literally by forgetting they were with me!
Posted by fredbutlerstyle at 15:08