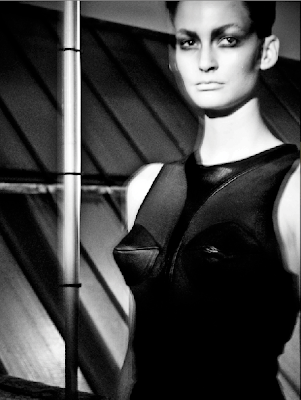 Malcolm is a name you will have seen in listings for  ASVOFF, SHOWstudio and for collaborations with designers such as Jean-Pierre Braganza, Michiko Koshino and most recently the Illamasqua makeup campaigns.  We are still in the tentative first stages of fashion film making with only a handful of names exploring the medium..................so before the industry blows up with dabblers, here is an insight into the mind of one of the initial pioneers who has been experimenting ever since his time studying Fine Art at UEA.  (On a personal note, Malcolm is wickedly dashing, sincerely polite and comfortingly charming...........whoever I introduce him to has to comment on this special combination!)

I think I have more appreciation of children's books now then when I was young. I remember really loving the illustrations in The Divine Comedy by Gustave Doré, and later (when I was old enough to understand it) the poem by Dante Alighieri. The woodcuts that Doré created are so immaculately detailed.

2)  What is your favourite character from a film and why...............do you particularly like the art direction in this film?

That's literally impossible for me to say, I love so many films.

3)  What was the first moving-image piece that you made?

My first ever moving-image piece was for my a-level's I think, called "Lucid". It was about a girl who couldn't speak, so she'd wired herself into a HAM radio in an attempt to do so.

4)  You studied fine art and still create work that has a "painterly aesthetic".............who is your favourite painter from history and have you been moved by (made a connection) a particular work of thiers in a museum?

I love paintings in general, Francis Bacon, Frida Kahlo, William Blake, Fuseli...
But my absolute favourite is Heironymous Bosch. I remember seeing "The Garden of Earthly Delights" and being so overwhelmed I nearly cried.

I've always kept sketchbooks, They used to be more mixed media, especially when I was still painting, now they're all in black pens.
I always have it with me, otherwise I get really nervous. 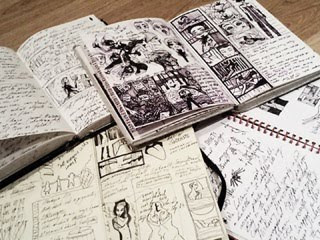 6)  Do you have a muse that is often in mind throughout your projects?

I try not to, it depends so much on the mood of the project, the range is pretty massive.

A lot of the time you have to change the way you convey your concepts to a client in order to make sure they understand it on their terms. Some people like drawings, some like written treatments, so it definitely keeps you on your toes. I try to storyboard for projects as long as there is enough time. I use it mostly as a structure to make sure we get everything we need to get, and make sure it leaves a lot of room to play, because you never know what's going to happen on a shoot. 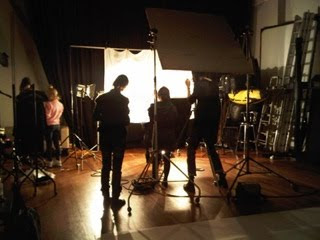 8)  In fashion film, what is your unique approach to showcasing the clothes within the narrative you want to capture?

I think the great thing about fashion film is it has it's own set of rules compared to shooting a short film. Most of the time showing the product is so important, and that's the element of fashion film that I enjoy the most; coming up with new and exciting ways to show off the clothes. That being said, I've done projects for designers that are meant to be more like mood pieces, setting an atmosphere, made long before the clothes are finished.


9)  How did the CCTV / night vision idea come about for Hannah's film?

Hannah had already come up with her concept for the collection, which was a great help. I had a look at her reference material, which included lots of cctv cameras. I was determined for it to be quite high contrast black and white and quite moody, but I didn't want us to lose any of the details of the clothes. I wanted the girl to be like a large cat almost, and so I started drawing her with glowing eyes, which lead me to night vision.

10)  You have a close working relationship with Alex Box which is fascinating..............how did you first meet and can you tell us a little bit about how you collaborate?

I consider Alex a kindred spirit in the truest sense, she is one of my closest friends. Having her on shoots is invaluable, as she brings so much to projects, not just from the makeup side. I usually start by meeting up with her and showing her my drawings and references, and she can immediately come up with something that is perfectly in tune. We first actually met backstage at a show of Gareth Pugh's in London, but we'd been speaking online, both being graduates of Fine Art from Chelsea.

11)  What would be your dream commission? 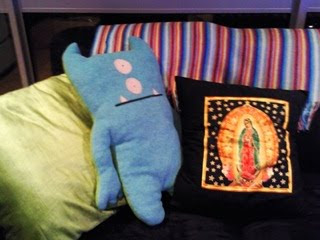 "where to crash after a long day of editing."
Posted by fredbutlerstyle at 16:20