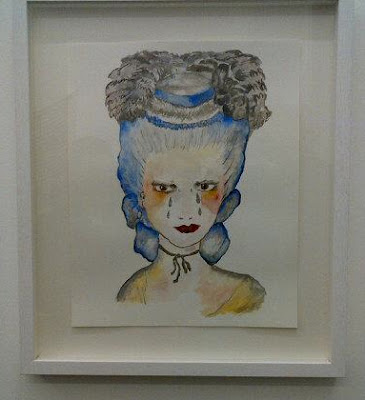 "2012 threw up a few personal conundrums but as I always say, 'it's all a learning curve', I'm glad to report I'm still learning and looking at things with fresh eyes so to speak. I think it's a constant that keeps me inspired and continually invigorated.

You know it's sometimes the unexpected moments that take on a life of their own, last year I found myself exhibiting in two group shows with the Simon Oldfield Gallery. Simon remembered my endeavours with the paintbrush and asked me to be in his summer show 'The Courtship Of The Peoples', I was very flattered to say the least. My current explorations being in watercolour, I actually did a foundation course at the age of 38 and flirted with the idea of continuing with a degree, alas funds and time got in the way but I've never stopped painting when I can. At the end of 2012 and the current group show 'Seduction' Simon once again asked me for another painting when he acquired a new space at 6 Carlos Place in Mayfair. For this one I took a look at the high romantic drama of Gainsborough (I love an old master) and took a direct reference to the 'Lady in Blue' incorporating a sorrowful self portrait into the equation.

Meanwhile on the fashion front the wonderful designer James Long unexpectedly came up with the idea of me painting a print for his collection. I was thrilled once again... he turned my work into a shirt!

On other moments I became Editor at Large at GQ Style. Full of enthusiasm it's a role which stretches my writing and organisational interests... and surprisingly enough I even got a portrait of Morrissey I painted included in the 2012 Autumn/Winter edition.

My mantra? To keep setting small personal challenges, exploring, learning and doing the best I can at whatever I attempt whilst encouraging those around me to do the same."


See Princess Julia's work at the Simon Oldfield Gallery, buy her James Long collaboration t-shirt at Studio Voltaire and follow her news into the new year via her own blog and Twitter.
Posted by fredbutlerstyle at 07:05