Last night I ran down to the Southbank to catch thecocknbullkid perform at the free afterparty for the Ether Peaches night. She rocked the ballroom of the The Royal Festival Hall to an audience of the city's jazzieslty coiffed and finest attired Circus tranny set. But she took to the stage in an outfit that showed them all up and carried the gauntlet of Peaches costume changes from the previous performance. The seamstress behind both act's stage outfits is the one and only Nova Dando. She really is a Super Duper Nova, making specialist pieces for many musicians alongside her own womenswear line, styling work and art direction. So I was thrilled when she showed me this on her camera phone! Last week she called in some of my archive pieces for the new La Roux video. Here you can see that she used my necklaces to full effect integrating the clothes to the set, the waistband on the chair and the cummerbund pinned deftly to Elly's t-shirt (teamed with a Fleet Ilya belt). You can also see some green in the background which is a giveaway of what is to come..............the set for the video was designed by Alun Davies and is apparently going to go under some lengthy ingenious CG..............can't wait to see the final edit!!!! 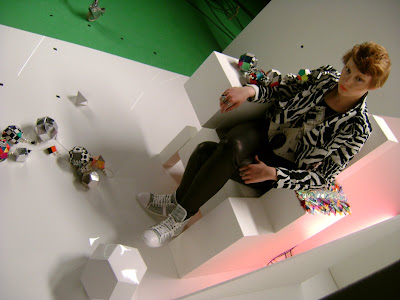 Email ThisBlogThis!Share to TwitterShare to FacebookShare to Pinterest
Labels: http://www.novadando.com/