G'day everyone! I've received some positive feedback on my somewhat international approach to intros and sign offs for Fred's blog so today in honour of Josh Goot I've instantly become fluent in Ozzy. Good idea, no? This arvo it was my absolute pleasure to attend his SS 10 show in an unassuming venue - the third floor of a multi story carpark deep in the sleazy heart of Soho. As soon as the assembled throngs were in place, and with very little fanfare and no dimming of the lights, the spectacle began. Some people might deduce that a designer choosing to eschew flim-flammery, trimmings and trinkets to such an extent - the hair was almost shower-damp and slicked back ,the faces clean, the shoes high but not to circus proportions, - must be resasonably confident in the impact of their designs alone.

And in my opinion, Goot's sentiment was not at all misplaced. This collection was coherent, clear in its vision and . . . . what're you saying Fred? Colourful? Lets have a look . . . . 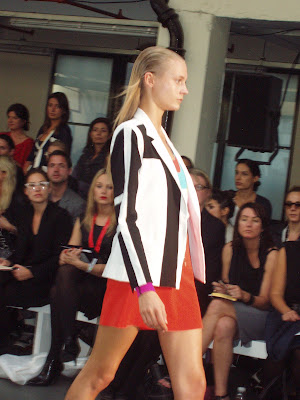 This look juxtaposes the three ideas that Mr Goot presented in various forms today.
1) test-card primary colours
2) monochrome in the form of inventive prints
3) Those crayon brights again, but in patterned form

His silhouettes stuck close to the body, in the form of fitted minidresses, cigarette pants and tailored blazers. 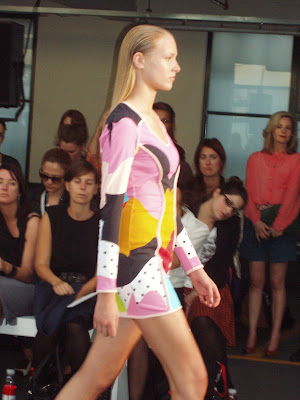 This dress was one of the first looks out. Who wouldn't want to wear this? There are the candy hues, but each one seems justified. Other designers just don't seem to know when to stop, piling on print after print until a nosebleed situation occurs but Josh Goot seems to know what he wants, and when enough is enough. Expect Topshp and Zara to follow suit (is that a pun? it wasn't intended) 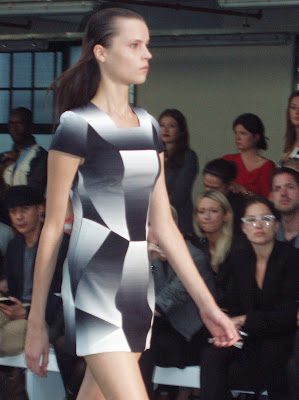 Quite a number of monochrome pieces were on show today, plus the looks that put the black and white together on the same garment as colours. The geometric nature of the panels and their precise, mathematical vibe put me in mind of Brit-Art icon Briget Riley's work. 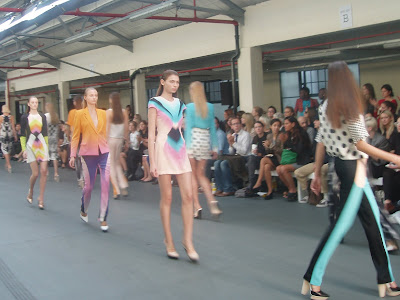 Awww mate? This show was a winner. Even when I scour my brain looking for the best quotes from Muriel's Wedding I can't come up with anything that does this show justice. Bravo.
Naomi Attwood