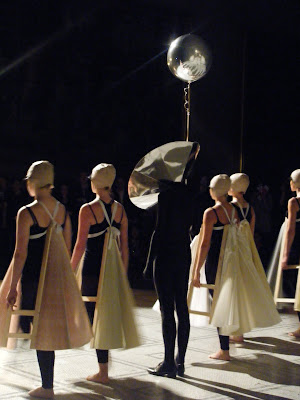 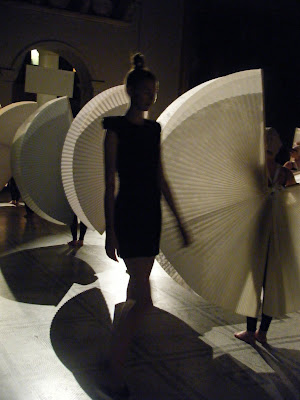 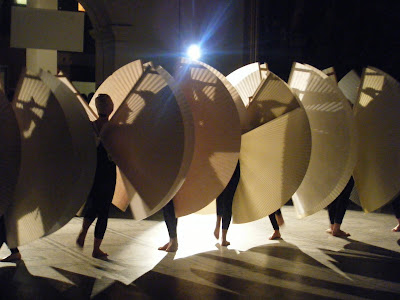 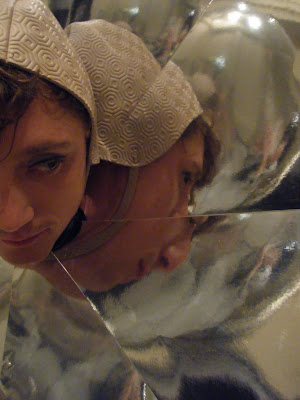 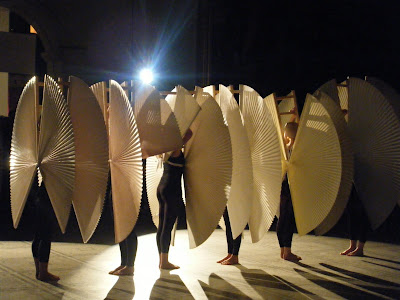 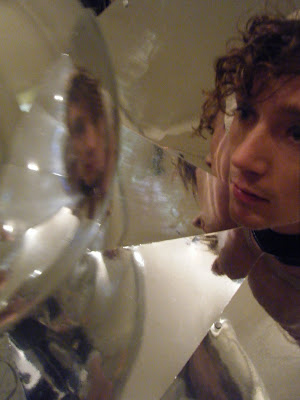 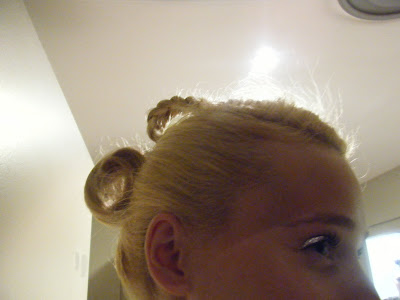 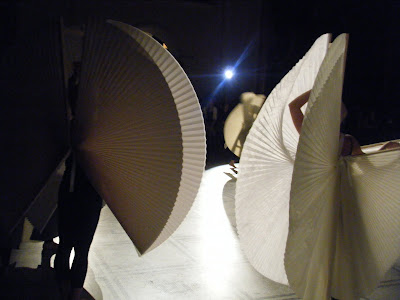 I'm devastated not to be in Paris for Jeffrey Hinton's film preview at Diane Pernet's ASVOFF2.  So thank God I have found a little gem in London to keep my faith in fate and quite frankly distract me from having a good old sob.
The V&A Friday late this month joined forces in celebrating the 25th anniversary of London Fashion Week by holding a showcase of British fashion in the form of a performance.  Set designer / Costume designer Petra Storrs had conceived a whole bedecked dance troupe to  be a physically moving backdrop to interface with models walking in 4 collections.  The designers on show were Hannah Marshall, Louise Gray, William Tempest and my forever favourite Dean Quinn.  As each girl circulated the immense space of the Raphael Gallery, Petra's dancers spun around creating vacuums for the girls to weave though.  As you can see, their clever attire was concertina wings that could fold flat or expand into circular pastel hue discs, enclosing the dancer, transforming into a screen to silhouette the inhabitant.  It was mesmerising and Ive included lots of shots here because I couldn't decide how to edit any out!
The whole event was opened by performance artist Ryan Styles who stepped out onto the mosaic floor in tap shoes, breaking the silence with a set of clink steps.  He wore one of Petra's trademark metal pieces which reflected gold light traces across the gilded ceiling of the hall and held an orb metallic helium balloon - another of Store's beautifully endearing signatures.
Thanks to Heather Turnbull for inviting me backstage to get these close shots of both Ryan and Thomas de Kluyver's silver leaf makeup.  Unfortunately I was there at just the wrong time to snap some of Quinn's genius reflective beadwork so I'm going to have to organise another opportunity for that.............
Posted by fredbutlerstyle at 10:16