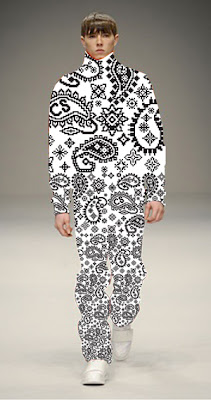 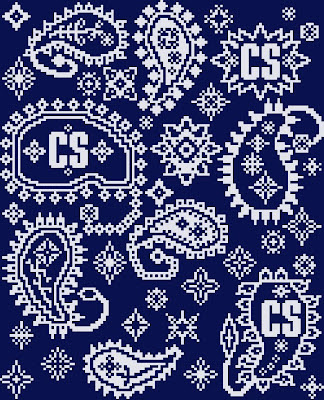 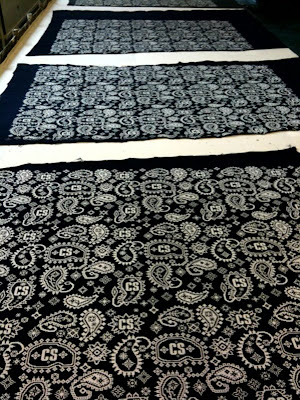 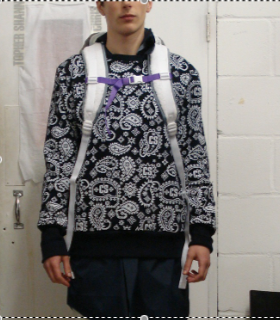 I was hyped about going to see Christopher Shannon's show again this season as he is one of my favourite (if not the one) menswear designer in London.  I bumped into Colin Henderson on my way in and we had a close look at the  fantastic invite with his friend James Dawe who had designed it..........my instinctive blog radar activated, and I wanted to know more (to follow.......).  Little did I know that Colin himself had designed the print on the actual garments awaiting backstage, which was a key element to the collection.  This Modest mouse never offers up any self publicity about his own projects but my Danger mouse nose caught a whiff of this stinking Stilton secret and sussed out the artist behind the print which wreeeeked of the digital Henderson.  He wasn't going to get away with withholding this information, so Ive been in touch now to procure the following info and pictures to share with everyone else the background to this brilliant embossing:

"Basically Chris wanted me to try and do 2 paisley patterns (one repeat and one that was like a gradient that gets smaller) and an embroidered emblem based on the paisley, so I looked at alot of paisley and tried drawing out these flowers over and over and over, which incidentally look like snowflakes. If I remember rightly, it had to be sent to the printers and embroiderers the weekend after meeting Chris, so it was one of the quickest jobs I've worked on but I'm really happy with how it's turned out - hope everyone else is into it too!  I've attached the pattern, how I mocked up the pattern to show Chris and then a couple of Blackberry and iPhone pics from Leeds and Chris that they sent to me."
I also got in touch with Chris to ask a little bit about how the idea came about.......to which he kindly replied:
"Collaborating with Colin was fast and straight forward which is the best way for me to work. I had all these snowflake and paisley patterns in my refs and also wanted a logo in there too. I'd been playing around but needed someone to bring it together with less tired eyes. We emailled back and forth for days, I thought at one point I'd asked him for too many tweeks and alterations that he may get bored. I always need someone to help me realize what Im thinking for the print and help me get it done and this season Colin was definately the right choice."

Apologies to Colin for being bossy about this, but really the world needs to know!  Its so gooooood.........check out the official pictures at Fashion 156 or GQ to see the final outcome.......or watch the actual show here.
Posted by fredbutlerstyle at 00:08

Curiously clever design. Can't wait to see men wearing this on the street...

This is real great, i cant wait to get by little mitts on some.....