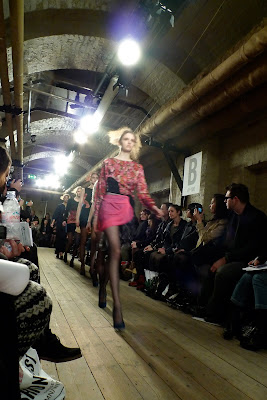 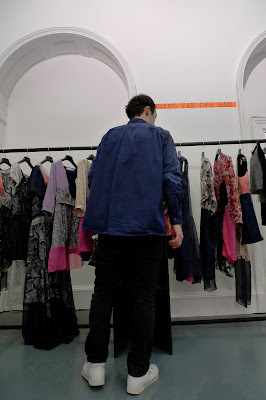 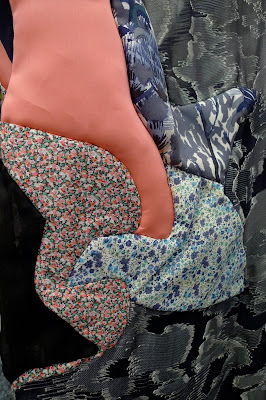 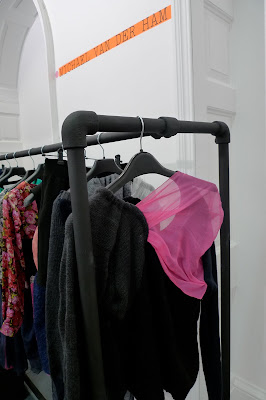 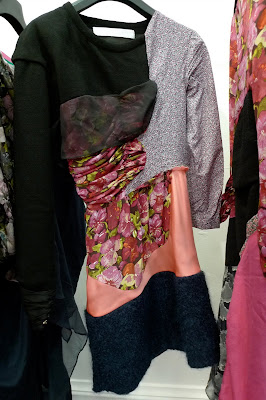 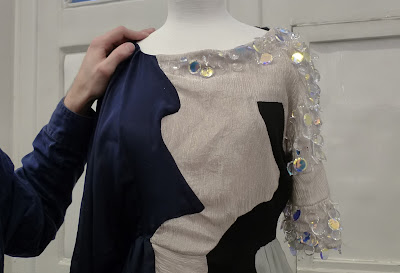 I was positively beaming with joy at The Fashion East show as I was so surprised to be in there.  As readers know, I have a vested interested in Michael Van der Ham, but not enough claut to warrant legitamate entry to his show.  However yesterday my angels formed an alliance up in the sky and I was smuggled into the labyrinth cellars of Somerset House.  I bopped down in the arches to keep a low profile but of course thats not easy with a menagerie in your mane (as caught by the lovely Diane Pernet).  As the lights went down and bass kicked in, I was sat front row and poised ready like a proud mum, unashamedly ready to point at the 1st girl out and elbow the editor next to me.
SO..........onto the most important thing THE CLOTHES..........
Michael has never seen anyone seam together soft sheers and bulky Boucle before, so he set about figuring it out.  He selected new materials to experiment in his patchwork pattern cutting with panels that look like large daubs of painted brush strokes.  The toiling process can be an expensive one, having to use the final fabrics in some instances to really gage the exact combination.  This season Michael mixed up organza Gazar with mohair and struck out on a knitwear tip, collaborating with designer Morgan Oliver.  He commissioned his ex CSM classmate to knit necklines and individual sleeves for him to graft on delicately pleated silk shoulders.  The grey and navy yarn yokes were hacked into with punchy fuchsia pinks, sophisticated zingy coral and precious jewel jades.  Here lies another of Michael's accents of mastery...........the fusion of fabrics that straddle the precarious causeway of accepted taste.  In his own words it could be gross in a gorgeous unexpected way or simply just gross.  That essence is the key ingredient in the recipe for a Van der Ham masterpiece.  This season it stepped up a level with the ingenius idea of approaching his stockist to provide the material for the jigsaw pieces.  When your relationship is with a national treasure such as Liberty this can only give way for a stunning string to your bow........and I suspect the fantastic support of Yasmin Sewell may have had a oar in this floral fusion.
The models coursed down the narrow runway billowing with Italian jaquard weave silk trails as styled by Claire Richardson.  Swarovski crystals shone out of the final two looks, which is the third and final first for Michael.  The iridescent pendants were sunk into heavy weight wool, nestling neatly in pockets  of prism reflecting raindrops.  Considering the unquantifiable expectation and anticipation on Michael's offering this season, I think it is unquestionably a bloody great success!  In the seemingly shortest of short seasons, he has undertaken his first ever feat of production and produced an entire fresh collection.  He has embraced the limelight by grabbing hold of it and running back to his studio to transform it into a new batch of blinding dresses to blast away the industry's critics breathing down his neck.  All of this hard graft and he still manages to politely return calls to individual sample requests or deliver quotes as he is in charge of his own PR.
Go Michael, go go go go............you are literally living your own dream and deserve every moment of glory..........
Watch a video of the show here 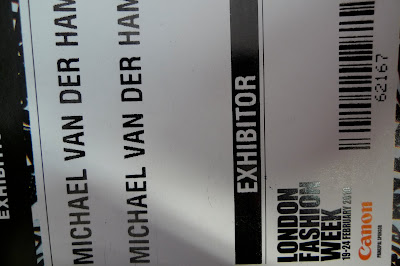