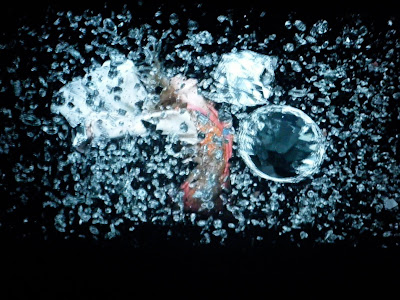 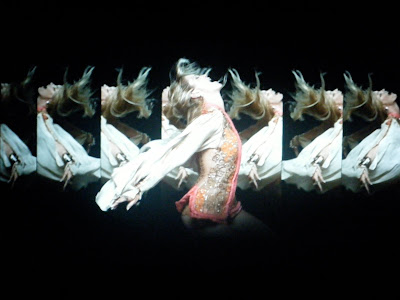 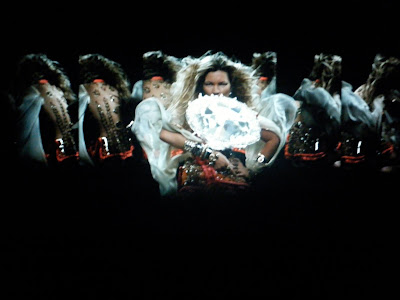 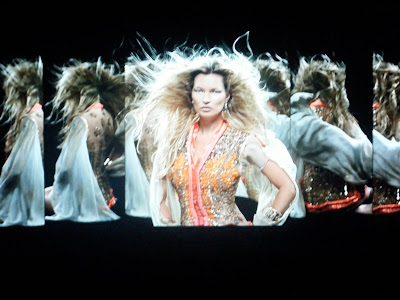 Here it is - fashion's first 3D film. Dammit Elisha wanted to do it but the £45, 000 figure budget required for a 1min short posed us a slight obstacle! So when I found out that AnOther Magazgine had commissioned Baillie Walsh to capture Kate Moss in 3D (leading on from their ground breaking holographic Alexander McQueen A/W 2006 show) I was desperate to check it out! Last night was the official preview of the experience at The Haunch of Venison on a triptych of screens. I grabbed the necessary specs and dashed in like a contestant on the Crystal Maze, frenzied with anticipation of the unknown. What unveiled before me were crystals and diamonds floating in inertia, flung from out of the screen by a screaming possessed goddess Kate Moss. It is incredible. The gems appear to be literally floating around, as if you could touch the facets of the very surface if you reached into the middle distance. All of a sudden a white-noise sound breaks and a giant spinning gem shatters and explodes in a sonic boom. Moss's wild and flowing hair is mimicked in a shower of splintered crystal rain. Its bloody brilliant. I was transported to the childish wonder and fun of the scene where Charlie is floating around the bubble room in the Chocolate Factory.
Now for the technical bit - it was captured at 1,000 frames per second with state -of-the-art Phantom cameras, specially built for the project to create slow motion formations in 3D. To enjoy the experience for yourself buy an issue of AnOther to get the red & blue lens glasses and log onto AnOther from 14:00 hrs today.
Congrats to Ballie for this hypnotic revelation.......
..... lets look back at some of his others..........Massive Attack - Unfinished Symphony (styled by Leigh Bowery) ............ Kylie Minogue - Slow.............. and Will Young - Leave Right Now, and his feature film "Flashbacks of a Fool" with costumes by Stevie Stewart.

Boy George - Generations Of Love (which features Leigh Bowery and Les Child).
Posted by fredbutlerstyle at 03:50